Amid pandemic, community responds to increased need with increased generosity 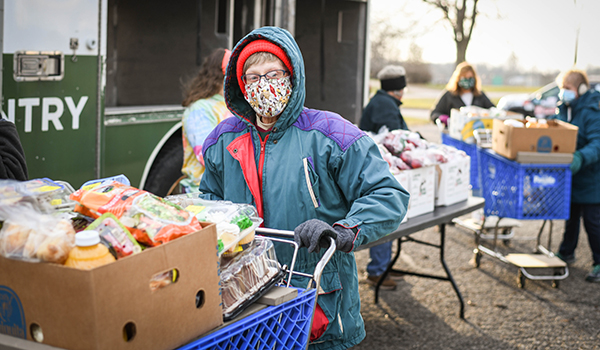 Less than one month after a global pandemic reached the area, southwest Michigan residents learned how dangerous the virus could be. As people bunkered down and avoided public spaces to lower the possibility of becoming infected, the virus began wreaking havoc in other ways.

Whether or not they contracted the novel coronavirus, countless individuals were plagued by new challenges. Many were out of work due to layoffs or earning much less than their usual wages due to cut hours and decreased gratuity as restaurants and other hospitality businesses were closed. As money became tight and children were home more, food became scarce in many households. Many parents had to choose between paying utility bills, feeding their families or paying their rent.

It did not take long before the streets of downtowns became a residence for more and more precariously housed individuals, and nonprofit organizations equipped to help with these needs were challenged to fill a growing need.

Although the need was greater usual, so too was the response from those in a position of giving.

For example, after children had been stuck at home for months due to COVID-related school closures, a Buchanan businessman set out to find a way to make in-person learning as safe as possible.

“As we all know, there are a wide array of different views on COVID and how we address it,” Rowland said, explaining how people of all political backgrounds and opinions on mitigation tactics pitched in so Buchanan schools could get personal protection equipment for students and staff. “The idea that was bridged between all those political and social divides to do something positive for our kids really hit home.”

Senior director of impact strategies for United Way of Southwest Michigan Amanda Drew agreed that the giving spirit has been in full force throughout the pandemic.

“We’ve done a lot in response to COVID-19,” Drew said. “We partnered with Berrien Community Foundation to set up the Southwest Michigan Cares Fund, which was created to aid nonprofit partners that are working to support basic human needs for our residents.”

To date, that fund has raised more than $1 million, evidence of not only the growing need, but the growing support as well.

Though ACTION initially saw a decreased need at the beginning of the pandemic thanks to stimulus checks and unemployment benefits, the need grew as COVID-19 case numbers grew, and restrictions became more and more severe.

In November, during one of the highest peaks of the pandemic, the Feeding America mobile food pantry ran out of food with 40 cars still left in line.

At another food distrubtion event in early December, cars were lined up three wide and as deep as the parking lot at Dowagiac United Methodist Church as Lori Styburski waited to collect food.

Styburski, who helps deliver food to children in the Cassopolis school district, has the unique perspective of seeing the need from both sides.

“My husband’s friend found out about at the senior center in Cassopolis,” she said. “He got a hold of us and let us know. It is really helping. I work at the school, and am getting some hours in because we are feeding the kids at different stops.”

As far has being on the other side of the table and giving food to students in need, Styburski knows that it makes a difference.

“If we didn’t give them a lunch or a breakfast every day, it may be the only meal that they have,” she said. “So, at least they are eating something, and it is all good and nutritious food.”

Rowland said he has seen a similar need in other communities. 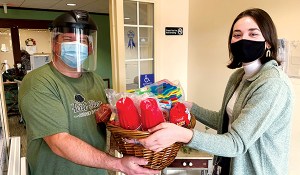 “In Niles, you see the homeless population has increased, and not only that, the amount of people that are in need of food services has increased. That was something we wanted to address directly,” he said.

Both Rowland and Drew said their respective organizations have seen an influx of individuals who desire to donate to help a specific need, such as food insecurity, rather than donating to a general fund.

“We’ve had a couple funders specifically for Cass County or southern Berrien County who have been very interested in making sure that there was food in those areas,” Drew said. “We’ve been partnering with many of the food pantries especially in Cass County to make sure people have access to food.”

“Donors have been very generous, but instead of in past years when people would come and say, ‘we just want to give to the Cass Area Fund,’ or ‘we just want to work with people in Niles,’ donor advised funds and area of interest funds are more of a focus now,” he said. “They come in and say, ‘I go through Niles and see the homeless population, and I want to address that’ or ‘I saw that they’re cutting funding for breakfast at the schools, and I want to fund that.’”

Another MGCF effort with large impact amid the pandemic has been the Help for Homes partnership with the City of Niles.

“The donor of that fund is Habitat for Humanity, and the purpose of it is to help low income residents and seniors with home repairs that they otherwise would not be able to afford,” Rowland said. “During this time, the increased need for being able to pay your bills and for food, we were talking very basic level needs, so the idea that low income Niles residents could afford to put a new roof on or put new windows on their home to make sure that they could stay warm in the winter, we saw this as a basic human need that needed to be addressed.” 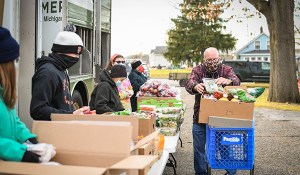 As such, MGCF doubled its commitment to the efforts, which enabled several homeowners to make necessary improvements to their homes that they likely would not have been able to otherwise make.

Since the beginning of the pandemic, United Way of Southwest Michigan has collected 22,000 donations of PPE, including 13,000 homemade masks.

“That was just incredible to witness,” Drew said. “We’re still getting calls from people willing to donate them.”

Though many have grown tired of restrictions and precautions put in place to slow the spread of the virus, the desire to give does not seem to be slowing down any time soon, according to the nonprofit leaders. And while the response has been heartwarming, they said it is not altogether surprising.