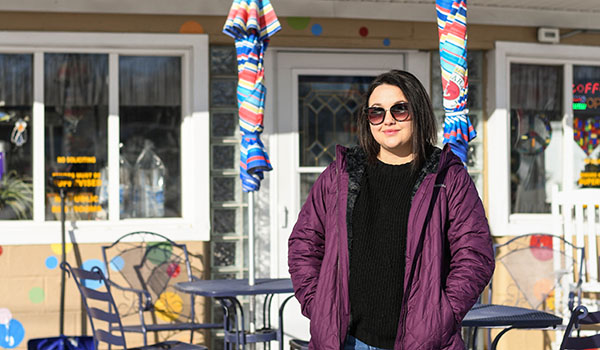 In late August, Paxton Schaller stood at the drive-thru window of Brew Ha Ha in Niles with her mother, Cherie. Five months into the COVID-19 pandemic, Schaller spoke to owner Joyce Bashara through the window. Cherie filmed the interaction over her daughter’s shoulder.

Schaller was telling Bashara about a challenge she has just completed. Bashara listened, as she continued to prepare the Schallers’ order.

“Have you heard of the ‘tip challenge?’” Schaller asked. “Recently, I got on Facebook, and I asked people to pitch in and send me money from $1 and $5. We raised enough to give you a $520 tip today.”

This made Bashara stop what she was doing.

“What? What? Are you kidding me?” she asked.

Schaller told her the tip was from 75 donors on her Facebook page.

Bashara put her head down on her arms for a moment and sobbed in surprise.

“This is for you. You really deserve it. You’re always really kind whenever I come to this window,” Schaller said. “This isn’t just me. This is everybody on my Facebook.”

Bashara looked at her, still surprised by what was happening. 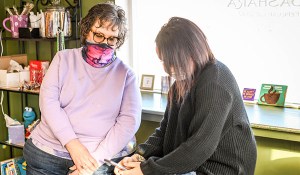 “But you started it. You are your mother’s daughter, with all the [work] she’s done,” Bashara said. “This job is not a job. It’s been a blessing from day one. I can’t believe you did that.”

Masked, and overcome with emotion, Bashara reached out the window to embrace Schaller.

A video of the interaction was posted to Facebook, where it received 740 reactions and 175 comments. The video struck a chord with the local community, as residents sought out heartwarming news during an uncertain time.

Schaller posted two videos to her Facebook that morning to show her donors where their money had gone. She had not anticipated the positive ripple effect her actions, and sharing them, would have.

At the start of 2020, Schaller witnessed TikTok celebrities and influencers raising money in challenges. Some called them “Venmo Challenges,” raising money in increments through their followers on the Venmo payment app. The trend began with giving tips that were $20.20 on small purchases or $2,020 to random servers.

Other TikTok users raised as much as they could and split it into large sums to surprise their servers who took care of them while they dined out.

“I thought, ‘I could probably do that.’ When I tried to raise the money, and presented the money, I felt like that’s how I am supposed to feel,” Schaller said.

Schaller took to her Facebook page and decided to try the challenge out for herself, setting a goal to raise $500.

More than 75 people responded to her first challenge, and soon Schaller had more than $1,000 to donate. She decided instead of surprising one person, she would split the amount and surprise two.

Schaller went with her mother to Prime Table Restaurant for breakfast and Brew Ha Ha afterward to get some food and surprise two unsuspecting people on Aug. 28.

She posted the video her mother took at Prime Table Restaurant surprising their server with the tip, as Schaller explained where it came from.

The unnamed server is seen laughing, smiling and fanning herself through the interaction, smiling widely behind her face shield.

“It felt really good,” Schaller said. “I didn’t want to make anybody feel awkward about if they needed or wanted the money.”

Schaller later learned that at least one of the recipients of her multiple tip challenges had been having a hard time finding the means to buy their children new backpacks for school.

“With that money, they could buy them backpacks now,” Schaller said. “That made me feel really good about the timing and how everything was really placed well together.”

Schaller was inspired to do the challenge again, focusing on helping two essential workers as they continued working on the “front lines” during the COVID-19 pandemic.

Through the holidays, Schaller reached out on Facebook for recommendations to raise money and to help families in need.

“I had about 25 people send peoples’ stories to me,” Schaller said. “I wish I could have helped all of them.” 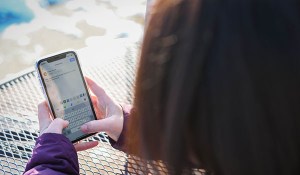 Feeling like she could not choose, she put all the names people had sent in on pieces of paper in a bowl and drew two.

“If I had one more box, or one more pet bed, nothing else would have fit in my dad’s truck bed,” Schaller said. “There was so much stuff. People were just dropping off animal things. That one was special to me, too.”

Schaller’s inspiration started at home, seeing her family members give back to the Niles community as she grew up. She would help in the ways she knew how as a child.

“When she was 10 years old or so, she had a birthday party and asked her friends to bring gifts for the animals at the shelter, where her aunt worked,” said Schaller’s mother, Cherie.

Cherie tagged along on the first two tip challenges. She knew being a server can be a challenging career even during a normal, non-pandemic time.

“I think the ‘tip challenge’ is wonderful. I spend my summers serving,” Cherie, who teaches the rest of the year at Ring Lardner Middle School, said. “I know how daunting it can be. You have good days, and you can have some pretty bad days.”

In part, Schaller said it was the example set by her mother and the rest of her family that made her want to bring the tip challenge to Niles.

After doing multiple challenges, Schaller realized big gestures mean quite a bit, but smaller ones can really add up for others.

“When I give somebody a compliment, hold the door, buy somebody a coffee … it’s not just raising $1,500 that can make somebody feel like they’re making a difference,” she said. “I’ve always done things like that, just maybe not to the extent I do now.”

She sees continuing to create challenges to inspire others to donate and help people and organizations in need as something she will continue to do in the future.

The tip challenge Schaller set out to accomplish to make an impact in the Niles community did not stop with her fundraising actions.

“I think people really want to help others, they just don’t know how,” Cherie said. “When Paxton asked for money, they trusted her and were happy to help. I know of at least one other person who joined the movement and did it with her kids.”

Giving is a community effort

“We have a couple of mutual friends on Facebook,” Katelyn said. “I just figured ‘the more the merrier.’”

Short had never met Schaller in real life, but through her posts Short felt moved to give something back to community members in a similar way.

“In December I also did a similar ‘tip challenge’ for an employee at the Rise ’n’ Shine Café,” Short said.

She also collaborated on an effort with her friends to donate to another of Schaller’s efforts to collect supplies and donations for the Humane Society of Benton Harbor.

“I had gotten together with friends. We all went to high school together,” Short said. “We had blankets, towels and pillows, and we dropped them off to Paxton.”

Supporting the community and small businesses was important to Short. Seeing someone else taking the lead inspired her to do the same.

“I have gone and tried to support businesses, do carry-out and to-go orders with restaurants,” she said. “It’s super inspiring that Paxton has been throwing little incentives [like gift cards] out there, so she ends up helping to support local businesses that way too.”

The ripple effect has led others to challenge their social media followers to participate in similar, fast fundraisers.

At least one other community member, Katie Filley, was inspired to take a similar action.

Short said she knew of a Facebook friend, Felicia Liberty, in Berrien Springs, who had been inspired to do the same as well.

Doing the challenges helped Schaller learn more about her community and the impact she could have, and she found other opportunities to help others in need.

“Honestly, none of this would have happened if I didn’t have the support I had,” Schaller said of the tip challenge’s success. “It’s so cool to see how the community came together through that.”

She has been exploring ways to keep working for the community, such as joining the Niles Noon Optimist Club and seeking ways to help nonprofit organizations through volunteer work.

“My sister convinced me to join [the Optimist Club],” Schaller said. “Normally, we would have a meeting each week where we hear from the community. People who might work at the museum or at a dispensary, who give us a presentation of what they are working on.”

She hopes to keep the giving spirit moving through the community and to keep connecting people in need with resources.

“I was never really a part of the community,” Schaller said. “Ever since [the challenges] I feel like I am. I want to keep going with that and continue to do these community-oriented things.”