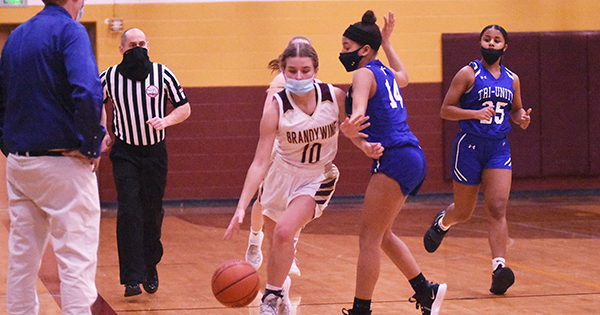 NILES — The youth and inexperience that makes up the Brandywine girls basketball team can be frustrating at times for veteran Bobcats’ Coach Josh Hood.

But in the fleeting moments that this squad puts it all together, they are a joy to watch.

Hood and his coaching staff went on a roller coaster of those emotions on Saturday during Brandywine’s come-from-behind 60-50 win over visiting Tri-Unity Christian.

“In the third and fourth quarter, we had five freshmen on the floor,” Hood said. “They have a chance to be really good. I hope they keep battling.”

Hood added that his team is a work in progress and is not always artistic in how they play the game.

“Nothing we do is pretty,” he said. “So, what we want to do is create ugliness. Tonight again, we created enough ugliness to get the win. It is not a thing a beauty. They are starting to figure out that you can feed off the defense. That has been are ‘MO’ the past 12 years. We had that stretch during the third quarter where that was the first time our girls got excited about defense.”

The win was the fourth straight for the Bobcats, who started one senior, two juniors and two freshmen against the Lady Defenders.

Tri-Unity jumped out a 7-0 start against Brandywine, who continues to play without senior Alysa Adamczyk, who suffered a leg injury and is awaiting an MRI this coming week.

Hood got his team to calm down and concentrate on playing better defense, leading to an improved offense. The move worked as the Bobcats outscored the Lady Defenders 13-2 over the remaining of the opening eight minutes to lead 13-9 at the break.

The game stayed close through the second, third, and part of the fourth quarter until Brandywine pulled it all together for the final stretch run. The Bobcats got the lead to double-digits with a combination of defense and outside shooting.

Knapp scored a game-high 24 points, while Scott added 11 points and was a presence in the paint at both ends of the court.

“Ellie Knapp for a stretch in the second half showed why she is one of the best players in the area,” Hood said. “Haley is doing a great job for us.”

The Bobcats (6-2) are back in action Monday as they travel to Coloma for a non-conference contest set to begin at 6 p.m. Brandywine follows that up with a trip to Howardsville Christian on Tuesday night. That game is also scheduled to begin at 6 p.m.

The Bucks remained undefeated (5-0) with a 58-35 non-conference victory over host Bloomingdale on Saturday.

Buchanan led 15-7 after one quarter, which it stretched to 37-14 by halftime.

Faith Carson had a game-high 16 points to lead the Bucks, who also got 12 points from LaBria Austin and Claire Shelton’s six points.

The Vikings dropped their second straight game as the numbers game finally caught up with short-handed Niles on Saturday.

Mattawan (6-1) took advantage of the Vikings, playing several JV players during the game. The Wildcats led 14-6 after one quarter and by 12 points at halftime, 25-13. The lead was 43-19 heading into the final quarter.

Kamryn Patterson, who had 26 points the previous night against Buchanan, was held to just eight points by Mattawan. Alexis Rauch finished with five points.

The host Eddies remained tied for first place in the Wolverine Conference following their 49-32 win over Otsego on Saturday.

Edwardsburg and Plainwell, who face off against each other on Wednesday night, are currently 5-0.

The Bulldogs kept it close for a half, trailing 29-18 at the intermission. The Eddies took control of the game in the third quarter after outscoring Otsego 11-3 to open up a 40-21 advantage.

Ella Castelucci tied for game-high honors with 12 points to lead the Eddies, who also got 11 points from Averie Markel and nine points from Katie Schaible.

Cali Miller had 12 points to pace the Bulldogs.

Niles puts it all together to snap 21-game losing streak

NILES — The waiting is over. For the first two weeks of the high school basketball season, the Niles boys... read more