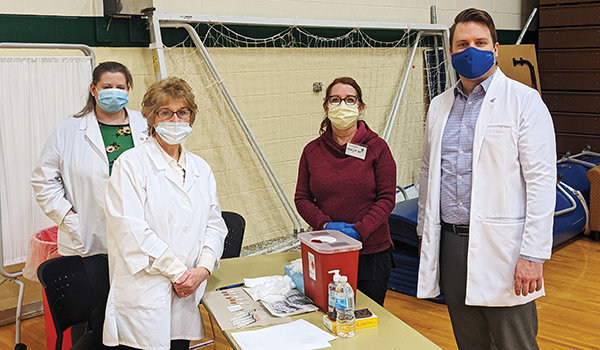 Meetings will be limited to an occupancy of 20. The announcement comes just days after the COA announced it will be opening its Cassopolis and Dowagiac locations on Monday. According to club president Bob Cochrane, meetings will continue to be available via Zoom.

Thursday’s special guest Lyndon Parrish, the director of security and conduct at SMC, discussed his work as the college’s COVID-19 task force leader, a position he has held since the pandemic began.

According to Parrish, sifting through the available information on the virus was difficult in the early stages of the pandemic.

“We were getting a lot of conflicting information,” he said. “Executive orders would come out and change weekly, so what we needed to do as a workplace, as an education center and other things, was come up with a plan. Meeting together as a group to define our strategy if it evolved was so important.”

According to Parrish, determining how to screen students and staff when they returned to campus was the task force’s first priority. The task force then decided to utilize Campus Clear, a free app built to help colleges and universities return to campus safely and make informed decisions about on-campus activity. More than 1,800 SMC students, staff and faculty downloaded the app.

“The app allows us to get a notice every day,” Parrish said. “They get a notice every day at 7 a.m. except for weekends. It asks you how you are feeling, if you have symptoms, do you have your close contacts and did you test positive. What you check comes back with either a red screen, which says don’t come to campus or a green screen that allows you to come to campus and we started that
in August.”

When the school opened the campus again, SMC president Joe Oldenwald emphasized the need to be strict regarding restrictions during this time. The school installed sanitizing stations throughout the campus and ordered thousands of masks.

“We’re doing our best to show our students and staff that this is what’s going to keep us open,” Parrish said. “We have to do this. We had to come up with how we were going to train our staff and students prior to coming. A lot of this stuff we were doing before the governor and the different executive orders made it mandatory. We put up exterior awnings so that we could have classes outside of our housing weather permitting.”

Parrish said that the campus’ capacity is currently set to 85 percent in case of emergency.

“We had a room for if we had an outbreak,” Parrish said. “How could we quarantine and where could we isolate? We had to make sure we had the proper disinfectant and the proper space to operate.”

The school has also played an important role in the distribution of vaccines in the area.

“It’s really the health department that oversees it,” Parrish said. “Our main thing is to make sure that we have the facility prepared to do it. We set up, and we clean up afterwards, which is very important. There’s no cost to anybody for that. It’s just something we do because it’s important for us as a college and as a community to get back in and go and this was the best way to do it.”

Rotarian Jennifer Ray thanked Parrish for his efforts during the pandemic.

“I just want you to know I’m so impressed and appreciative of all your efforts and ingenuity and getting students able to return to learn,” Ray said. “You’re a shining star in our community at SMC and I’m so appreciative of the COVID clinics. They’ve been so well-run just and everybody there has had a positive attitude. It just was smooth and absolutely a positive experience.”

SOUTHWEST MICHIGAN — Michigan Works! is issuing a call to action to the community to fill out a six-question survey... read more