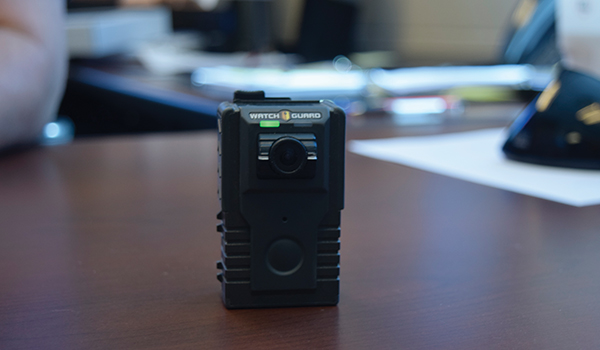 NILES – Body-worn cameras are on their way to the Niles Police Department, after an anonymous donor offered to cover the more than $50,000 cost of obtaining the equipment.

At the Niles City Council meeting Monday evening, the council approved the purchase of the 18 V300 body-worn cameras, supporting hardware and software, and extended warranties from WatchGuard for the Niles Police Department.

The cameras will likely arrive and be set up to be worn daily by officers in the next two months.

“Because of the sheer cost of this project, not that the city couldn’t take it on, but when you’re dealing with a tight budget you are always trying to prioritize. ‘What do we need?’ ‘What do we want?,’” Millin said.

He said “the needs” and “the wants” often come down to similar priorities in the end.

Cost was a major factor in whether the department obtained the body-worn cameras. With the in-car cameras, incidents and stops were recorded from the front-seat viewpoint of a patrol vehicle. The angle is nearly a 180-degree view from the vantage point and records audio. The shortfalls of the in-car cameras are if a situation moves out of view of the camera.

“Until the lawmakers had a chance to review where they were going with body-worn cameras, and how the Freedom of Information Act would apply to that, we were kind of waiting to see how all of that was going to go,” Millin said. “Some things have been ironed out in legislation, and because the donor came forward, it’s just the right time to make this move.”

The 18 body-worn cameras match the size of the department. There will be enough for each officer to utilize them. The WatchGuard body-worn cameras will work with existing camera systems in the patrol vehicles.

“[The WatchGuard camera model] integrates with our current in-car video system, allowing the two systems to function together and reduce the issue of failure to activate,” Millin wrote in a report to city council.

Millin said the cameras will give the department more information to work with than they are operating with right now.

“Oftentimes when we go to court, somebody will say ‘that didn’t happen,’ ‘I didn’t say that,’ or ‘that’s not what I told the officer,’” Millin said. “We will have that evidence. It also gives us good video evidence of a scene at the time of an incident as an officer sees it. [The cameras] really provide us with more evidence that we can use to support a case in court for a victim, or whomever.”

HAGAR TOWNSHIP – A Hagar Township man has been arrested on first degree arson charges after setting his own home... read more