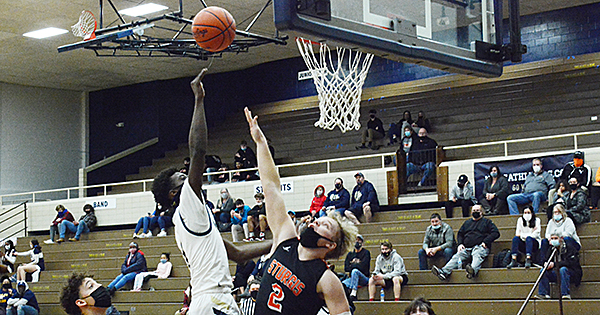 NILES — The Niles boys basketball team was right where it wanted to be.

An Adrian Thomas pull-up jumper trimmed Sturgis’ lead to 30-27 entering the fourth quarter, with the Vikings in position to win their first game of the season.

But the Trojans had other plans, outsourcing the Vikings 18-9 in the final frame to earn a 48-36 victory Tuesday night.

“They worked hard,” said Niles head coach Patrick Touhey. “We really struggled with having the confidence to close games. Hopefully, there will be a time where that will sink in at some point. I liked the looks we got on offense, but we just weren’t able to put the ball in the hole.”

A 10-0 Sturgis run in the second quarter could have taken the wind out of the Vikings’ sails, but they pulled within four before entering halftime down 23-16.

The Vikings had a tough time handling all-state guard Thomas Kurowski. The son of former Notre Dame point guard Keith Kurowski, he finished with a game-high 20 points. The attention he draws from defenders on every possession allowed for Sturgis’ Bradyn Webb [eight points] to make back-to-back 3-pointers to put the Trojans in control of the game.

“[Kurowski] is a tough matchup,” Touhy said. “He gets a lot of attention. There are assignments that we missed in the half-court defense that let some of the other kids get some easy scores that really hurt us. We couldn’t afford to give that up and we got hung up on some picks. Those three-pointers from those other players were very hurtful for us.”

Niles continued to fight, with a Zach Stokes 3-point play trimming the deficit to 42-36 midway through the fourth quarter, but that was as close as the home team would get.

“I think they were uncomfortable with our pressure,” Touhy said. “We got some turnovers from them and changed the pace of the game a little bit. I think it gave us more of an opportunity to compete against them. Obviously, we don’t like to lose, but I do appreciate that our kids never gave up.”

Adrian Thomas led the Vikings with 14, and Jordan Jones scored 10 of his own. Thomas has improved over the course of the young season, and Touhy has taken notice.

“He’s playing under control,” Touhy said. “Adrian’s always been a great athlete and very quick and so what he’s learning is what his strengths are. If he stays in control, he’s really helpful to us. If he keeps playing like that, he’s gonna benefit. I’m very pleased with where Adrian is at right now. I think if he stays with it, he’ll only get better.”

The Vikings (0-5,0-2 BCS) are still searching for their first win, but in year two of his program, Touhy is seeing the fruit of his labor beginning to pay off.

“I care about the boys so much,” Touhy said. “They work so hard and I just would like to see them experience some wins. We’ve taught them a lot about not paying attention to the score.

That keeps them working because they’re playing for a different reason; they’re playing for each other as opposed to the scoreboard because we’re a program that’s building and improving. We’re setting a different kind of standard of work ethic. Even though it’s not showing up in the win column, I will tell you that our program is in a much better position right now than it was 16 months ago. I thank them all the time for trusting, believing in us, and working hard for each other.”