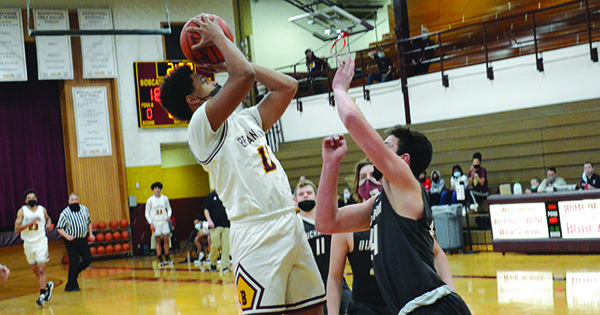 NILES — You never know what to expect from Brandywine-Buchanan boys basketball games, and Friday’s game did not disappoint.

The Bobcats played host to rival Buchanan Friday night and held on to win 61-51 in a key Berrien-Cass-St. Joseph League play.

The Bobcats led by as many as 18 points in the second half before Buchanan began attacking the basket and getting to the line. A Gavin Fazi three-point play cut Brandywine’s lead to 53-49 midway through the fourth quarter, but the Bobcats were able to get some stops on defense and closed the game on an 8-2 run.

“It was a good, back-and-forth game,” said Brandywine coach Nate Knapp. “They made a good comeback. They slowed us down a little bit in the second quarter; We wanted to get up the floor and did a good job controlling the tempo. We just like to play fast, get up and go. Our young kids were a little nervous with a lot of unforced turnovers, but I was happy with the way the kids bounced back from losing the St. Joseph the other night and got after it tonight.”

Kendall Chrismon led Brandywine with 15 points and Caleb Byrd scored 10, while Gabe Gouin and Jaremiah Palmer scored eight points apiece. Palmer started in his first Brandywine-Buchanan game as a freshman and made plays on both sides of the ball. His brother Jamier Palmer and Nathaniel Orr were also freshmen who saw key minutes in Friday’s game.

“The three freshmen we have are just athletic, amazing and quick,” Knapp said. “It was Jaremiah tonight but any night it can be any one of those three. They’re just that good. It’s amazing to watch them in practice, they get after it and work hard. They get good leaders from the seniors and it’s just a great team. They all get after it. We have good leadership and they just follow each other.”

Buchanan did not get off to the start head coach Reid McBeth was looking for. The Bucks fell down 11-2 early in the first and struggled getting onto the same page offensively. The Bucks trailed by as many as 14 before going into halftime down 32-20.

“We didn’t show up to start the game and it’s a good basketball team,” McBeth said.

“You have to show up for four quarters against a team like that. I don’t think we matched their intensity. I don’t know what it was but you can’t show up like that. We’ve got a long season in front of us. We have to do a better job being prepared. We’ll learn from this and get better, hopefully.”

The Bucks struggled mightily from the free throw line, making just 8 of 22 free throws. Logan Carson led all scorers with 17 points and Macoy West had a career-best 14 points while Gavin Fazi added 11. The Bucks were without starter Ryan Young, who is out indefinitely with a fractured ankle, according to McBeth.

“We didn’t do a good job getting the ball to Logan in the first half,” McBeth said. “He was kind of hanging out on the perimeter. I knew we were out of sorts because we didn’t we didn’t have the energy we needed to have. So that’s my job as a coach to get them ready and we’ll do that the next time we meet up. Hopefully, we’ll be a little bit more prepared to play.”

Eddies rise to the top of the Wolverine Conference standings

EDWARDSBURG — The Edwardsburg boys and girls basketball teams are off to a successful start. The Eddies’ are atop the... read more