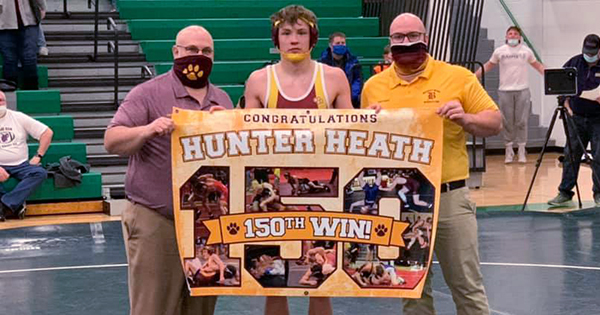 BERRIEN SPRINGS  — At times this fall and earlier this winter, Brandywine senior Hunter Heath thought he might not get a chance to reach one of his goals for the 2020-21 season.

Fortunately, despite the late start, Heath was able to reach the first of those goals — winning his 150th career victory.

The Rams went on to win the match 45-25 as Brandywine gave up 30 points in forfeits.

Heath would add to more wins on the night over host Berrien Springs and River  Valley.

“During football when it was off and on whether or not we would be playing, I was thinking wrestling was not going to even be a factor this year,” Heath said, who is the fifth Brandywine wrestler to win 150 matches. “I was a little scared.”

“That is what I grew up trying to do,” he said. “Get 100 wins and then 150 wins. I want to break the school record, but right, now with the reduction in matches, it is going to tough to break that.”

Brandywine coach Rex Pomranka was equally excited for his senior and for how his team is developing.

“Giving them [South Haven] 30 points right off the bat,” he said. “The kids wrestled well. Hunter’s match was a good one. That was a returning state qualifier he beat. It was a good match for the two guys.”

Pomanka said that getting time on the mat is the key now. The Bobcats are back in action on Saturday as they travel to St. Joseph for a quad.

CASSOPOLIS — It is one thing to be a part of a long family history. It is another to be... read more

Man who led police on two-state chase headed to prison

Chase leads to the capture of larceny suspects