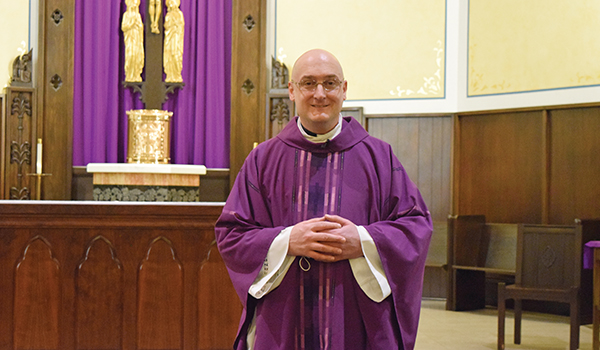 SOUTHWEST MICHIGAN – Just after 6:15 p.m. on Ash Wednesday, Father Christian Johnston watched as members of his congregation spray down the wooden pews of Niles’ St. Mary of the Immaculate Conception Parish’s with a disinfectant. His light blue face mask stood out against the purple robes he wore. He joked they would need to be refinished sooner than initially planned due to the extra cleaning.

In the last of many firsts, Ash Wednesday services were hosted with pandemic precautions in place.

For Ash Wednesday, the first day of the Lenten period of about 40-days between Ash Wednesday and Easter, Johnston said not too much was different that had not already been changed in the past 11-months due to COVID-19 precautions. The church has been hosting in-person services since May.

“The only difference that we had was saying the invocation, ‘remember you are dust, and to dust you shall return,’ to every person. I just said it once, and then did ashes,” Johnston said.

He said the Vatican, where the Pope lives and is the headquarters of the Catholic Church, gave an option that ashes could be sprinkled instead of smudged into the cross shape on worshiper’s foreheads.

“In our diocese, we had the option to do that or speaking the invocation once,” Johnston said. “I figured the forehead can’t be that much of a spreader. That’s the only real difference for Ash Wednesday itself. The rest are differences we have had all along.”

The church also hosted five services this year, throughout the day, to give more options and in an attempt to spread worshipers out between services.

The pews in the church’s sanctuary are roped off to allow a pew in between each one, encouraging social distancing. He said about only about half of the number of people come to Mass regularly as they did before the pandemic arrived.

Johnston said he observes about 99-percent of the congregation wearing face masks when they attend Mass.

Other small changes have been made, such as music and singing being more subdued in services than in the past.

“Things like the sign of peace, usually, we have a greeting during Mass. Now, they sort of bow to each other instead of shaking hands,” Johnston said. “The other thing that has been different is receiving the precious blood, but we had stopped that before the shut down in spring because things were getting a little hairy.”

The precious blood is the communion wine Catholics drink as they take their sacraments, representing the body and blood of Christ. Traditionally, it is given to those receiving the holy sacrament with a communal chalice.

The church was supposed to celebrate its 150th anniversary in 2020.

“We thought, maybe in 2021. Now, we are thinking maybe in 2022,” Johnston said. “We had all of these things planned and each month, one by one, they went by the wayside. We will get to them eventually.”

Twenty minutes down the road, Our Lady of the Lake in Edwardsburg also adjusted its Ash Wednesday practices for the pandemic. Those entering the church are greeted with bottles of hand sanitizer and ushers ensuring visitors are kept as safe as possible. Pool noodles line the pews to keep parties 6 feet apart at all times.

“Everyone is taking care to be as safe as possible,” said Father Raj J. Nathan. “For this Ash Wednesday, things are different. We are maintaining pandemic protocols.”

Ash Wednesday, unlike St. Mary of the Immaculate Conception, Our Lady of the Lake opted to sprinkle ashes on the heads of parishioners rather than placing them on foreheads. The Edwardsburg church also chose to say a general prayer for all who came into service rather than say a specific prayer for each person to cut down on time service goers were being exposed to one another. Following Ash Wednesday, the church would typically host fish fries each Friday during Lent, but those events were canceled due to the pandemic.

According to Nathan and Administrative Assistant Cindy Antos, Our Lady of the Lake’s Ash Wednesday services were an extension of what the church has been doing since the beginning of the pandemic. With roughly 40 percent of usual parishioners attending in-person services, the church has turned to virtual streaming and email communications to keep in touch with members.

“This, of course, has been difficult because sometimes the teachings of the catholic church are not reaching people right now,” Nathan said. “We have been trying out alternate ways of reaching out.”

“The church is all about community, so this has been very hard on everyone,” Antos added.

Nathan came to Our Lady of the Lake a little more than a month ago. Prior, he served as a priest in the Battle Creek area. Leading a new church and Ash Wednesday services during a pandemic was foreign to him.

“This is very strange,” he said. “People like to welcome a new pastor, but there have been many restrictions in this time of pandemic. Still, people have expressed their goodwill and welcome through email and letters. That was very nice, but still, when all this is back to more normal, I’m looking forward to meeting all the parishioners.”

Despite the strangeness of leading a church during a pandemic, both Nathan and Johnston were able to reach their parishioners during Ash Wednesday — even services came with modifications. Now, both pastors are looking forward to seeing things go back to normal once the pandemic ends.

“I think we are all looking, in the near future, to get back to our community and what we were doing before,” Nathan said.

NILES – Eighty seventh and eighth graders at Eastside Connections School are researching a putting together a virtual museum in... read more