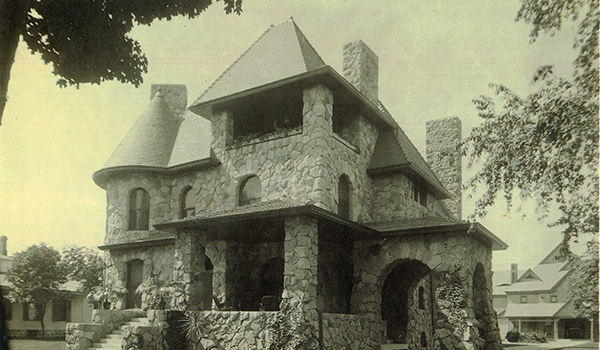 DOWAGIAC — One of the city’s most famous properties has been listed for sale.

The historic Lee Mansion, 405 W. High St., was listed for sale last week through Cressy & Everett Real Estate. The listed price for the property is $799,900.

The estate is being sold by Jorgensen Properties, which owns the Lee Mansion and approximately 16 rental homes in Dowagiac. Svend Jorgensen died in April 2020 at the age of 94.

Also known as “The Rockery” or “The Stone Mansion,” the 2.8-acre property was originally built by Fred and Kate Lee in 1895 and includes both the Lee Mansion and Carriage House. The mansion has since been converted into six apartment units and the Carriage House has five apartments.

The mansion was built with locally harvested uncut fieldstone with tons of oak, maple, mahogan, and butternut hardwoods in the floors, walls, and ceilings along with inlaid hardwood floors and parquet. It also features five stone chimneys and eight fireplaces, including Italian marble, onyx and hand-painted tiles.

“They spared no expense in constructing it and outfitting it,” said Dowagiac Area History Museum Director Steve Arneseau.

If the mansion were to be turned back into a single-family home, it could possibly be a 10-bedroom, seven-bath home along with a third-floor ballroom, according to its real estate page on the Realtor website.

Arseneau said the estate was built to serve as the home for the Lees, the heirs of two of Dowagiac’s most influential families: the Lees and the Beckwiths.

Fred’s father, Chauncey Lee, was a lawyer and banker who moved to Dowagiac in 1857 after closing a general store he owned in Edwardsburg. Born in 1858, Fred Lee married Kate Beckwith — the daughter and heir of P.D. Beckwith, the founder of the Round Oak Stove Company and arguably the Dowagiac’s most influential figure — in 1878.

Fred and Kate decided to build a mansion in the early 1890s, a few years after the birth of their daughter, Mary, and they used Chicago firms for both the architecture and the interior designs.

There was also some controversy at the time of construction. While the president of Round Oak was building a lavish estate, the national economy was suffering due to the Panic of 1893 and Round Oak asked its workers to take a pay cut. Strikes ensued with some violence in the city, including a fire set at the stove works.

“While I have not seen quotes from strikers discussing the Rockery, there was almost certainly some resentment among the workers that they were asked to take a pay cut while Lee was building a mansion,” Arneseau said.

The mansion was finally built in 1895, but the family was not able to enjoy it for very long.

Five years after moving in, Kate died from illness in 1900, at the age of 42. According to Arneseau, her funeral was said to be the largest in city history to that point.

Two years later, Fred remarried to Mary Gray, the woman he had been having an affair with while Kate was still battling illness.

Fred and Mary Gray later moved to a home on Main Street, which had been built years earlier for Fred and Kate’s daughter, Mary Beckwith Lee, to live in with her husband — a home they occupied, as Mary Lee died shortly after giving birth in 1910.

The mansion has passed several different owners over the years but has remained a fixture in the community for well over a century and is a reminder of the city’s prominent past.