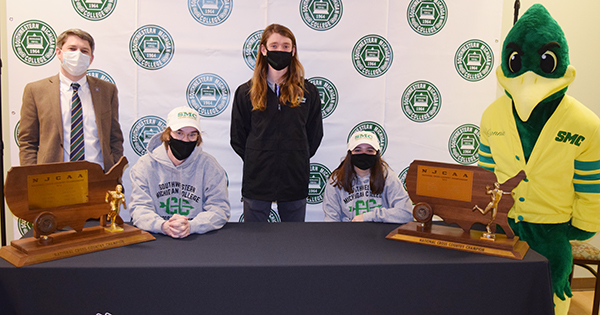 SMC is bringing back cross country after a 25-year absence. The school announced last August that it would start is sports program with the team that put SMC on the map — cross country.

The school announced Silenieks to lead the program back in October.

Coloma’s Vanessa Crisenbery and Otsego’s Samuel Reed-Loomis are the first two runners to join the program.

“This is a great first step for Southwestern Michigan College Cross Country,” Silenieks said. “The two student-athletes will be a great building block for the future. I am confident that we are bringing on two fantastic young athletes who will set the tone for the culture we want at SMC.”

Crisenbery qualified for the Michigan High School Athletic Association state cross country finals as a senior. She has competed in cross country since she was in the seventh grade.

“We had a small team, maybe five of us, who ran,” she said. “There was a group of us interested, so they put together a little team. We only did a couple of meets, but that’s what got me to keep going.”

Crisenbery ran her personal best time of 23:58 at the state finals, which Michigan International Speedway in Brooklyn hosts.

“I was the only girl on our team to run her best time at that meet, so that was very exciting and rewarding,” she said. “Overall, we did pretty well as a small school running against ranked teams.”

The Coloma standout said that SMC has what she is looking for educationally and gives her a chance to continue her cross country career.

“It’s close to home, so I can go home when I need to,” she said. “They have a good elementary education program through Ferris [State University], so I’ll do my first two years here at SMC, then transfer to Ferris.”

She plans on teaching kindergarten.

Loomis-Reed is no stranger to Dowagiac, as Otsego is a member of the Wolverine Conference.

He went to Gobles High School his freshman and sophomore years before transferring to Otsego for his final two years.

Like Crisenbery, he began running at an early age.

“About sixth grade, I knew it was something I wanted to keep doing, though I didn’t know it would be past high school,” he said. “I ran track all the way through high school. I was a hurdler and a mid-distance runner. When I heard about the program here I was like, ‘I’ve got to do it!’ I’m going to major in music education to be a music teacher. After I graduate from SMC, I want to go back to Washington and maybe transfer to Washington State University or the University of Washington in Seattle, where my dad went.”

Loomis-Reed also said that he was interested in joining the program once he learned that SMC was bringing back cross country.

Although he may not have competed in cross country before, he enjoys running.

“Ironically, I’ve never been on a cross team,” he said, as the fall sport conflicted with marching band. “Coach was a little surprised when I told him that, but I was in track from fourth to 12th grade. In fourth and fifth grade, it was a fundamentals program, like intramurals, then in middle school, it was more organized.

“Running is something I love to do,” Reed-Loomis said. “I’ve been running 18 miles a week, and need to bump that up to 25 to prepare for a college sport. I’m the first person in my entire family history to ever do a college sport. I feel really good about that. I have witnessed plenty of cross-country meets while I was in track. All the track and long-distance running has prepared me for this. I really feel ready.”

SOUTHWEST MICHIGAN — The state of Michigan reported new COVID-19 cases over the weekend, according to the Michigan Department of... read more