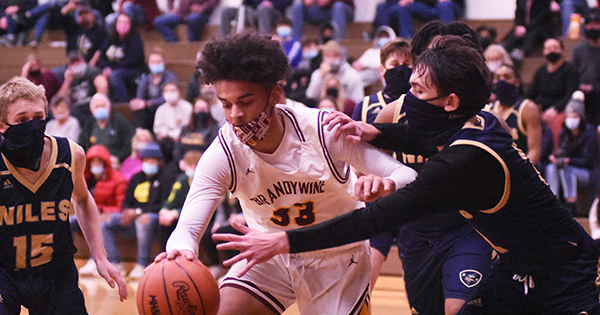 The contest was high-energy from the start, with both teams looking to push the ball up the court and get into its offensive sets quickly. 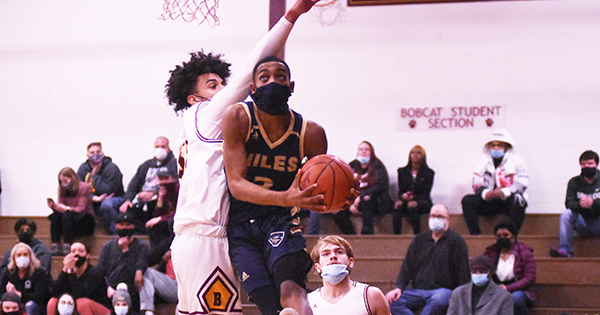 Niles’ Jordan Jones drives to the basket against the Bobcats. (Leader photo/SCOTT NOVAK)

The Bobcats were a bit more consistent shooting the ball and attacking the basket than the Vikings, who made some first-game mistakes.

Brandywine opened up a 20-13 advantage in the opening quarter, which it extended to 44-27 by halftime.

Niles played better in the second half after making some adjustments, but could never get enough defensive stops to make a serious run at the Bobcats, who led 55-43 heading into the final quarter.

“in the second quarter, we kind of stopped doing the things were doing, and there was a lot of one-on-five,” said Brandywine Coach Nathan Knapp. “We stopped moving the ball around. Defensively we let up a bit and Niles got comfortable. Then we went on a run to end the first half.”

Niles cut the lead to 27-24, but were outscored 17-3 the rest of the way as Brandywine took a 17-point lead into halftime.

Former Niles player Kendall Chrismon scored a game-high 18 points to lead the Bobcats, who also got 17 points from Nate Orr and 15 points from Carson Knapp.

“They were very quick,” Knapp said of the Vikings. “At times, I thought they were even quicker than we were. But that is what you want to see, You want to gauge where you are at.”

The Vikings return to the court Friday night as they travel to Berrien Springs for another BCS Red Division contest. Tipoff is set for 7 p.m. Brandywine hosts arch rival Buchanan in a key BCS Red Division clash on Friday. That game is scheduled for 7:30 p.m.