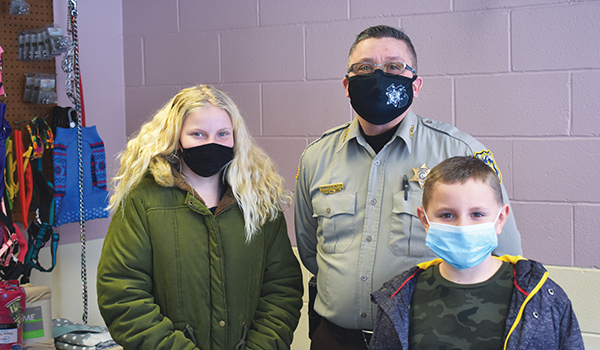 CASSOPOLIS — Two Cassopolis children recently honored their father’s memory by giving back to the community.

Izzie, 12, and JR, 8, Kennedy celebrated the birthday of their late father, John “JK” Kennedy, on Feb. 1 by donating $300 to Cass County Animal Control. JK, who died unexpectedly in 2018, was an annual donor to animal control, and Izzie and JR wanted to celebrate their father by donating to an organization he loved.

“We were trying to think of something nice to do for [JK’s birthday], and I researched, and a suggestion to carry on a loved one’s memory was to donate to a charity or something important to them,” said Izzie and JR’s mother, Monica McMichael. “Animal control has always meant a lot to our family. They are a wonderful organization, and a couple of years ago, we adopted our cat from here.”

McMichael said she brought up the idea of donating to animal control for JK’s birthday to Izzie and JR, who were immediately on board with the idea.

“I think this helped with a very tough and emotional day,” McMichael said. “It helped knowing that we could do some good for an association that could really use it. We know how much love animals have brought to all of us, and to be able to help animals find a home and give others the love and comfort that we have seen means a lot.”

While the donation was emotional for all involved, Izzie and JR said it was something they were happy to do.

“I like that [animal control] gives back to and takes care of the animals,” Izzie said. “It felt good [to donate].”

Butts said he was moved by Izzie and JR’s donation.

“It’s fantastic to see the support and the excitement level they have to help out their local animal shelter,” he said. “Ultimately, they will be the next generation of caretakers for our animals.”

Cass County Sheriff Richard Behnke also said he was touched by the donation made in JK’s memory.

“The community is always so supportive of animal control, and this is one of those instances that just stood out,” he said.

Both Izzie and JR said they hope to donate to animal control again in the future, and Izzie hopes to one day volunteer at the shelter.

“I’m very proud of them, but I’m not surprised,” McMichael said of her children’s desire to give back to the community. “They both have such big hearts. This is not the first time we have donated, and they are always thinking about others and wanting to give back.”

McMichael said she knows she is not the only one proud of her children. She believes JK is looking down on them with a smile.

“I know he is beaming with pride,” she said.

CASSOPOLIS — The Cassopolis Village Council approved selling a pair of houses to the Cassopolis Main Street Committee at its... read more