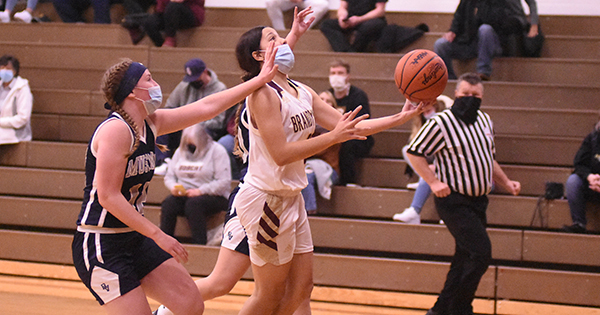 Experience not a problem for Brandywine in opener

NILES — Area powerhouse Brandywine may have graduated most of its top players last year, but that did not stop the Bobcats from kicking off the 2020-21 season with a victory Tuesday night.

With limited practice due to the late start of the season, the Bobcats showed flashes of what could be in its 66-32 victory over the Mustangs.

“You can see our youth movement,” Hood said. “This is the first time since I have been at Brandywine that we have graduated five of the top six and their leadership. Now, everybody is in a different role. Now, you bring up all the freshmen. I was really proud of our girls.”

Despite some early growing pains, Brandywine (1-0) was able to open up a 16-7 lead after one quarter, which it extended to 36-11 by halftime.

Even without his usual number of experienced players, Hood had his Bobcats playing pressure defense, shooting 3-pointers, and trying to get the ball inside. All three phases of the game had successful moments, but has a lot of work to do since Monday was the first and only day of contact practices since November.

Hood said his team would work hard in preparation for its meeting with crosstown rival Niles at the Bobcat Den on Friday night.

“There are so many things that we need to get better at, especially if we want to compete with a team like Niles,” he said. “We have known for a long time that this group of freshmen coming up had the potential to be special. They have a chance to be good. I am excited for the seniors and the juniors. They did not have a lot of success in junior high, but I kept telling them they needed to keep working because when you get to high school, and we bring everybody together, you have a chance.”

“Libby came in and gave us some really good minutes on defense,” he said. “Haley Scott did a really good job of leading the young kids. You know, at the varsity level, there is going to be some ups and some downs. The main thing is to stay the course.”

Freshman Ellie Knapp, daughter of Nathan Knapp, the Bobcats’ boys basketball coach, led all scorers with 18 points in her first career game. Brandywine also got 14 points from Kadence Brumitt and 13 points from Abdullah.

River Valley (0-1) was led by Taylor Volstroft’s 13 points. She was the lone Mustang to reach double figures.

In his 12th season as the Brandywine coach, Hood is looking forward to seeing his team mature as the year goes on.

“I told the girls after the game that this team has the potential to grow the most in a short season,” he said.

Niles and Brandywine will tipoff their one and only BCS Athletic Conference meeting at 6 p.m. Friday.

BERRIEN SPRINGS — During a year of much uncertainty, Honor Credit Union’s top priority was to remain steady, reliable and... read more