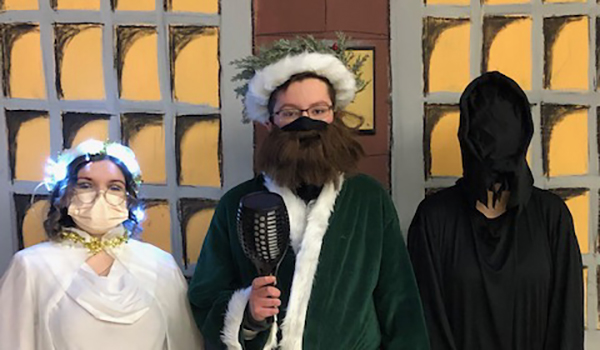 NILES – While the lines may have read “bah humbug,” Niles High School actors were in high spirits following a limited in-person and virtual production.

The past weekend’s production of “Scrooge!” from Niles High School students reached an overseas audience of family and friends. One of two YouTube streams reached nearly 600 views, while a small in-person audience of students’ closest family members were able to attend in person.

Niles High School musical director and producer Matthew Hunckler said staff members had affectionately given the production the unofficial distinction as the high school’s “longest-running musical.” At 19-weeks in the works, the cast, stage crew and all involved overcame the unique odds the pandemic has dealt.

At the beginning of the temporary YouTube stream of the show, recorded by On Base Productions, Niles High School Principal Molly Brawley is seen addressing the audience before the performance began.

“We have a mantra here at Niles Community Schools: ‘respect, responsibility, resiliency,’” Brawley said. “Boy, have [the students] shown resiliency. Time and time again, from every obstacle that possibly could have imagined from shut downs to virtual classes, trying to log in to virtual practices, switching roles, getting quarantined, through everything you can think of they have persevered.”

Brawley thanked the adults who helped encourage the students, as well as the adults in the audience who continued to wear their masks and kept space between families in attendance.

“I think, probably in the area, we are the only people crazy enough to do this,” Brawley said.

She said throughout the process, she spoke with students who asked her to continue allowing them to have the musical performance. She said as long as they could follow the rules and do it safely, they would find a way to bring the students’ hard work to the stage.

On Tuesday morning, Brawley was still thrilled with the performance.

“The kids pulled it off and did a fabulous job,” she said.

During the stage adaptation of the classic story of Charles Dickens’ “A Christmas Carol,” there were some unique elements to the performance outside of the presence of face masks. During a moment of memory in the production, which includes a dance, the casts’ choreography was altered to allow for spacing and minimal contact while keeping the spirit of scene.

“We had our lead [actor] play two roles, because nobody else could do his role,” Hunckler said.

Bridging the roles of Ebenezer Scrooge and Mr. Fezziwig was Kaleb Ott.

“Nobody else would have been able to do [the character of] Fezziwig,” Hunckler said. “In the middle of the scene, he runs across stage [and changes quickly] to do both characters.”

The stage transitions also took place in live time, without breaking from the action to do so.

“I appreciate the support of the superintendent and my principal beyond belief,” Hunckler said. “They really gave the kids support in the production.”

Hunckler thanked many supportive stage parents, like Darla Schneider, who helped arrange the audience and organized refreshments for the students, and Brooklyn Jackson, who helped with many small details that helped connect the show to the community.

“We rose to the occasion,” Hunckler said. “We broke a leg.”