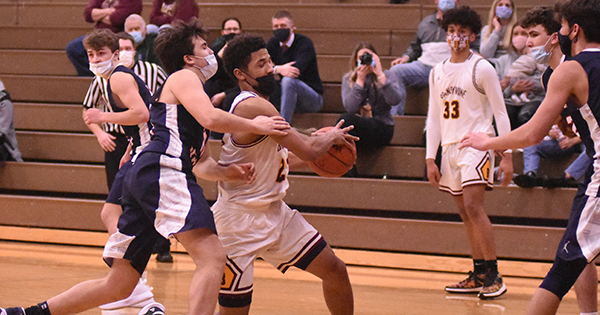 NILES — Experience and speed were a deadly combination for the Brandywine boys basketball team against visiting River Valley Tuesday night.

The Bobcats (1-0) return plenty of experience from last year’s district finalist. Brandywine is also athletic and deep, which allows the Bobcats to pressure opponents all over the court and play fast on offense.

Being the first game, with very little practice under their belts and just one day of contact practice, the Bobcats played a little too fast. That led to some forced shots and turnovers. But those are two areas that veteran Brandywine Coach Nathan Knapp knows his team will improve on quickly. He also noted that 10-of-25 from the free throw line will not be good enough as the season progresses.

“We are energetic, and we like to get up and down the court,” Knapp said following the victory. “Defense is our thing. There are a few things we need to work on, but we are going to keep coming at you. We have a deep bench, and the kids have bought into the system. It is a lot of fun.”

For all practical purposes, the final outcome of the contest was decided in the opening eight minutes of the 2020-21 season. The Bobcats forced turnovers and got up and down the floor quickly, which resulted in a 22-5 advantage. Brandywine stretched the lead to 40-13 by halftime, which allowed Knapp to get his entire squad plenty of court time.

The Bobcats are going to focus on two areas in preparation for their crosstown showdown with Niles Friday night: free throws and boxing out.

“Boxing out we have not been able to work on a lot because of no contact practices,” Knapp said. “We were able to work on free throws, but we were a bit more tired tonight, and the legs were not there.”

Ashton McNabb was the lone River Valley player to reach double figures as he finished with 14 points.

Niles and Brandywine are scheduled to tip off at 7 p.m. on Friday following the girls varsity basketball game.

SOUTHWEST MICHIGAN — As of Wednesday, Berrien County reported 10,341 COVID-19 cases and 209 deaths, according to the Michigan Department... read more