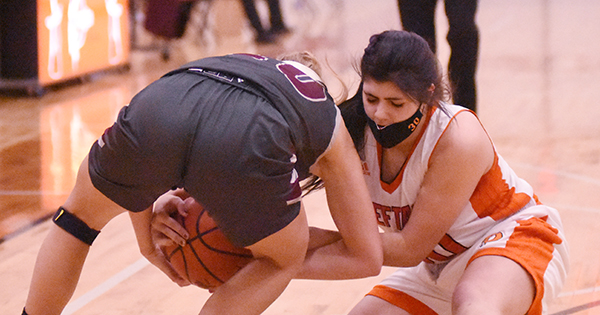 DOWAGIAC — After spending months waiting for the season opener, the Dowagiac girls basketball team may have been a bit too anxious, according to Chieftain Varsity Coach Jason Turner.

Dowagiac got itself in early foul trouble, which kept two of its top players on the bench much of the first half of its 51-39 non-conference loss to visiting Watervliet Monday night.

Senior four-year starter Allie Connor and sophomore center Alanah Smith picked up two quick fouls and spent much of the first half watching from the sidelines.

When Dowagiac had its starting line up on the floor, it was more than competitive with the Panthers through three-plus quarters.

“It was really great to finally take the court and have some competition after nearly four months,” Turner said. “The girls were excited and pumped to get back to some competition. They were obviously too excited and amped up, as that caused us to get into some quick foul trouble.”

Watervliet (1-0) led 13-11 after one quarter and held between a four- and six-point advantage much of the first half.

When Turner returned Connor and Smith to the floor, the Chieftains were able to erase the Panthers’ advantage, tying the game several times before Watervliet opened up a 27-20 lead at the half.

Foul trouble continued to plague the Chieftains throughout the second half. Turner did his best to rotate players in and out of the line-up to try to stay with the Panthers. That worked to a point, but Dowagiac was never able to find a comfortable rhythm on offense.

Dowagiac (0-1) struggled rebounding in the game. This allowed Watervliet extra scoring opportunities, which they were able to convert on, especially in the fourth quarter when it pulled away from the Chieftains.

“I loved the energy that we played with tonight,” Turner said. “We had some great spurts defensively, and then we had some lulls, especially on the boards. We will need to focus on defensive rebounding as well as getting back on defense. Overall, there are a lot of things we can take and learn from in this game. I really liked how we attacked off the dribbles tonight and got into the paint, but now we need to take that next step and realize what to do with it from there and just relax.”

The Chieftains are back on the court Wednesday night as they open up Wolverine Conference action at Vicksburg. Tipoff is set for 7 p.m.

LANSING — The Michigan Community College Association this week announced that it has received an $800,000 grant to improve student... read more