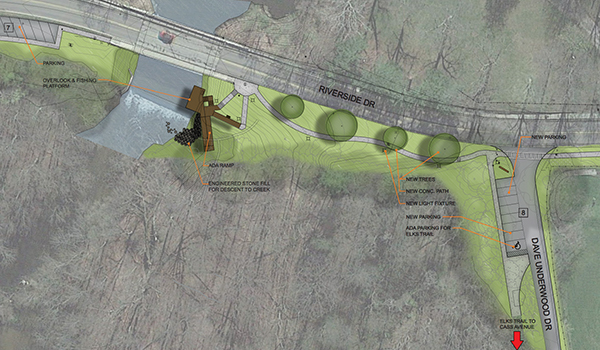 DOWAGIAC — Though snow may have blanketed southwest Michigan Monday evening, Dowagiac City Council members’ minds were on green grass, as the council approved an application that could bring a new park to the city.

Monday, the Dowagiac City Council hosted a public hearing and approved a resolution to authorize City Manager Kevin Anderson to apply for a Michigan Natural Resource Grant for Riverside Park, a park development along Riverside Drive adjacent to the Dowagiac Creek.

According to a project document prepared by southwest Michigan-based design group Wightman, the park project would include the creation of an overlook platform at the dam at Riverside Drive as well as other site improvements, including:

“This is something we have been talking about for a long time,” said Dowagiac Mayor Don Lyons.

Anderson said the application should be completed by the end of March and sent to the state for review. Anderson estimated that it would not be until December that the state would act on the application. If approved for funding, the city could receive funds as early as next February, but contracts could keep the project from beginning in earnest until well into next year.

“This is kind of a hurry up and wait situation,” Anderson said. “At best case, we are looking at a timeframe of fall of ’22.”

• The Dowagiac City Council approved a resolution to authorize an agreement with Midwest Energy and Communications for electric line services.

Under the terms of the agreement, the city will pay only for actual work received, according to a memo sent to the city council by Anderson. MEC and the city will annually agree to projects for the upcoming year so that work can be scheduled appropriately. At the same time, routine maintenance will occur based on the industry standards for electric utilities, and engineering services will be provided as necessary. MEC will be responsible for all personnel and equipment necessary to provide the services necessary for after-hours services.

• The council approved a cost-share agreement for culvert replacement on Rudy Road. The culvert in need of replacement serves the Pine Lake District, which includes properties in Dowagiac, while being a part of the Cass County Road Commission maintenance jurisdiction within Wayne Township. Under the cost-share agreement, the city of Dowagiac, Wayne Township and Cass County would share the repair costs equally. The total cost of the project is estimated to be $29,000.

• The council approved the sale of land on Spruce Street to develop a new house pursuant to the city’s housing initiative program.

DOWAGIAC — The Southwestern Michigan College gym has been bustling in recent weeks, and it is not because of a... read more