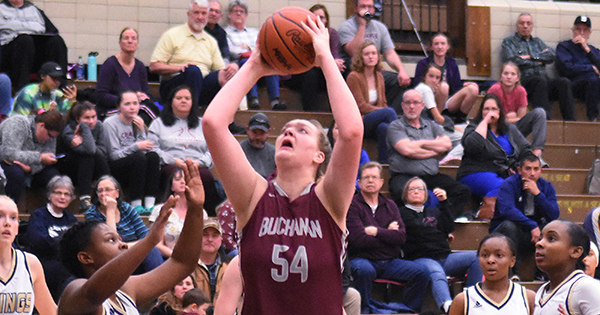 BUCHANAN — The girls basketball 2020-21 season was originally slated to begin for the Buchanan Bucks on Dec. 1.

Monday night, more than two months later, the Bucks finally took the court as the winter high school sports season for boys and girls basketball, along with competitive cheer and wrestling, got under way.

While teams may have shown some signs of the time off and limited practices, the Bucks rolled to an easy 61-15 win over BCS Athletic Conference foe Berrien Springs.

“It was really nice to be back on the floor, I think more than anything for the kids to have a sense of some normalcy,” said Buchanan coach Gabe Miller. “You could see we have a little game rust, but our girls played hard and did a nice job executing what we attempted to do on offensively and defensively.

The game was over after just one quarter, as the Buchanan outscored the Shamrocks 18-2. Berrien Springs was unable to score that many points in the entire four quarters.

The Bucks (1-0, 1-0 BCS) went inside to center Faith Carson, who was just too tall for Berrien Springs to stop. Carson finished with a game-high 23 points.

Buchanan led 39-5 by halftime and 53-7 heading into the final quarter.

Taneya Shivers had seven points to lead the Shamrocks.

Buchanan is back in action Friday night as it hosts Comstock in another BCS contest.

“We’re looking forward to getting back in the gym tomorrow [Tuesday] for our first contact practice and working on some things,” Miller said.