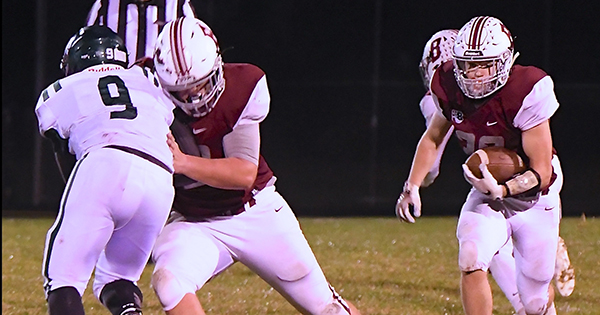 The rule regarding blocking below the waist in the free-blocking zone in high school football has been revised for the upcoming 2021 season. (Leader file photo)

INDIANAPOLIS, Ind. — The rule regarding blocking below the waist in the free-blocking zone in high school football has been revised for the upcoming 2021 season.

This rule change was recommended by the National Federation of State High School Associations Football Rules Committee at its Jan. 10-12 meeting, which was held virtually this year. This change to the 2021 NFHS Football Rules Book was subsequently approved by the NFHS board of directors.

As a result of numerous interpretations of current language regarding blocking below the waist in the free-blocking zone, the committee approved another condition in Rule 2-17-2 that must be met for a legal block below the waist in the free-blocking zone, which is a rectangular area extending laterally four yards either side of the spot of the snap and three yards behind each line of scrimmage.

The new requirement (2-17-2c) is that the block must be an immediate, initial action following the snap. Under the current rule, an offensive lineman can delay and then block below the waist if the ball is still in the zone. In the committee’s ongoing quest to minimize risk in high school football, the change was approved to require the block to be immediate.

“This change makes it easier for game officials to judge the legality of blocks below the waist and minimizes risk of injury for participants,” said Bob Colgate, NFHS director of sports and sports medicine and liaison to the Football Rules Committee. “This change lets game officials observe the block and make a call without having to determine where the ball is and what formation the offense lined up in.”

The committee noted there has been no criticism of the current rules governing blocks in the back as they are delayed blocks by nature, above the waist and considered to be a safe and necessary legal block.

“I believe this rule change will help make the interpretation of blocking below the waist consistent across the country starting next football season,” said Richard McWhirter, chair of the NFHS Football Rules Committee and assistant executive director of the Tennessee Secondary School Athletic Association.

The Football Rules Committee is composed of one representative from each of the NFHS member state associations that use NFHS playing rules, along with representatives from the NFHS Coaches Association, NFHS Officials Association and NFHS Sports Medicine Advisory Committee.

A complete listing of the football rules changes will be available on the NFHS website at www.nfhs.org. Click on “Activities & Sports” at the top of the home page and select “Football.”

According to the most recent NFHS High School Athletics Participation Survey, 11-player football is the most popular high school sport for boys with 1,006,013 participants in 14,247 schools nationwide. In addition, there were 31,221 boys who participated in 6-, 8- and 9-player football, along with 2,604 girls in all four versions of the game for a grand total of 1,039,828.