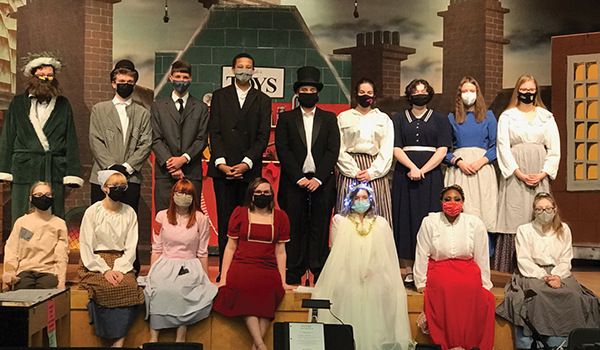 NILES – The cast of Niles High School’s “Scrooge!” will be able to bring their performance to a small live audience and virtual one on Saturday and Sunday.

The cast has overcome many hurdles on its path to perfecting the production. One of the last rehearsals was cut short due to a winter weather advisory on Thursday. Despite the challenges, the show will go on.

The stage adaptation of Charles Dickens’ “A Christmas Carol” will bring the spirits of Christmas to life once more for audiences this weekend. A limited audience will be allowed into the Niles High School auditorium to watch the live production in person. OnBase Productions will be working with the school to livestream the two performances on YouTube at 7:30 p.m. on Saturday and 2:30 p.m. on Sunday.

The rehearsals have lasted a record 19 weeks for the production due to the many uncertainties the students and schools have faced navigating the changing COVID-19 mandates throughout the school year. Auditions were hosted in September, and with rules on gatherings, activities and in-person learning changing, the process has spanned to include virtual practices leading up to the upcoming performances.

The play will mark the 35th Matthew Hunckler has directed, and he said it is one of the “craziest” he has navigated in his life.

“Once we were finally allowed to get back together and start rehearsals again two weeks ago, we’ve put forth a great effort,” Hunckler said. “The stage was set. The props have been ready since Thanksgiving. The kids had to get reacquainted with the stage. Our lead, the student playing Scrooge, got sick, and has had to drop out.”

Though the student made efforts to rehearse virtually, a last-minute shuffle in casting was made with students determined to perform.

“The kids rallied, and they’ll still put the show on,” Huckler said. “The student who was the lead last year in ‘The Music Man’ stepped up and said he would be Scrooge. Another student stepped up to fill Marley’s role. Each kid is doing three or four characters all the way through the whole show.”

The production began with 25 students cast, but with the time commitment for rehearsals continuing, Hunckler said around 18 to 20 remain in the cast.

Hunckler has worked with Megan Bartlett and David Girton for the choreography and music. The music has been adjusted, as a pit accompaniment was not an option for the performance per COVID-19 mandates.

“She’s all about this,” Hunckler said. “She has been so supportive. She just wants us to put the show on.”

The performers will be masked during the show, and social distancing is being observed even on stage.

“Every so often, the kids get close, but it is brief,” Hunckler said. “We have modified all the dances so the kids aren’t touching and waltzing together. It’s hard to do, but we have managed to do it.”

Those wishing to be in the virtual audience may access the live performance at 7:30 p.m. on Saturday and 2:30 p.m. on Sunday on the Niles Community Schools YouTube channel.

The school has obtained permission from the royalty company to stream the performance to YouTube, where it may remain for up to two days after the original stream.