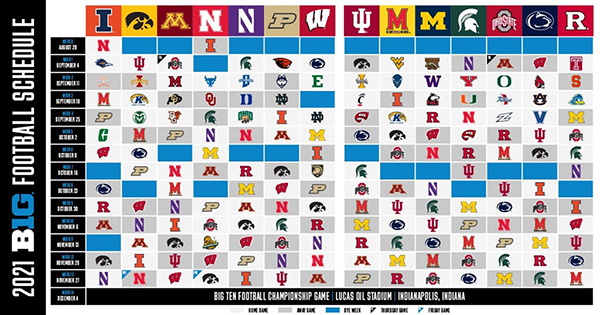 Michigan State’s three-game nonconference schedule had been previously announced: Sept. 11 vs. Youngstown State in East Lansing, Sept. 18 at Miami, and Oct. 2 vs. Western Kentucky for homecoming.

Due to scheduling changes during the 2020 season, the Big Ten updated its conference schedules for 2021.

The Big Ten Conference Administrators Council, which includes the directors of athletics and senior women administrators from all 14 member institutions, approved a revised 2021 Big Ten football schedule that was released on Friday. The schedule was updated in order to accommodate the following six games that adjusted locations as a result of changes made during the 2020 scheduling process:

The rotation of these Michigan State games in future seasons has been reset based on the location of the 2020 season.

All other opponents and locations remain intact from the previously approved version of the Big Ten schedule. The only additional changes involve the sequencing of games throughout the schedule, including the return of traditional rivalries in the final week of the season.