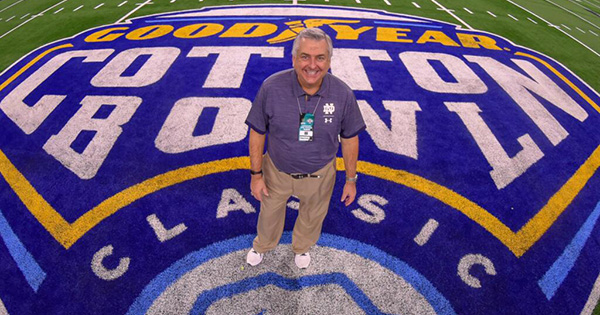 Jack Nolan is retiring after 39 years as the voice of Notre Dame athletics. (Photo courtesy the University of Notre Dame)

NOTRE DAME, Ind. — Jack Nolan, a fixture of Notre Dame athletics broadcasts for 39 years, has announced his retirement at the end of the 2020-21 men’s basketball season.

“I have been truly blessed to have been associated with the Notre Dame Athletics Department for 39 seasons,” Nolan said. “I will be forever grateful to all the athletes, coaches, colleagues and fans who have been so wonderful to me over the years. However, the time has come for my wife Rhonda (Brown) and I to live a more normal life.

“We want to get off the road and off the nights, weekends and holidays work schedule we have both navigated for so long. We hope to indulge our passion for travel, our desire to be warm during Michiana winters and be able to spend much more time with family and friends.”

A jack of all trades, Nolan has been a staple around Notre Dame football and men’s basketball games for close to 40 years. He’s taken home many awards as both a news and sports anchor, served as master of ceremonies for innumerable Irish special events and established himself as one of the most recognizable faces of Notre Dame athletics.

“Jack Nolan has been with us since I started at Notre Dame and it is hard to think about our broadcasts without him,” said Notre dame Men’s Basketball Coach Mike Brey. “His professionalism has made my job easier and his broadcast calls are as much a part of our basketball legacy as ‘The Burn’ or the three-point shot. I will miss having him around the program, but if anyone deserves the ability to enjoy a long and happy retirement it is Jack and Rhonda.”

Nolan joined the South Bend community in 1982 after spending a year at upstart cable news network CNN after graduation from Missouri in 1981. The opportunity to call play-by-play of Notre Dame football games was the catalyst for him to take the job at WNDU, the local NBC affiliate.

At the time of his arrival at WNDU, the station was owned by the University and broadcast Irish football games that were not selected to be on national television. Nolan had an immediate award-winning impact on the football broadcast crew, taking home Associated Press play-by-play awards in 1983, 1987 and 1989.

Nolan also anchored the WNDU sports desk throughout the 1980s and ‘90s, while adding in weekend news anchor duties in 1993. He met his future wife, Rhonda Brown, while working together and the couple co-anchored WNDU’s NewsCenter 16 Sunday Morning from 1996 through 2002.

His long run with Notre Dame men’s basketball began in 1982 on both radio and television, eventually becoming the regular radio analyst with Jack Lorri and then assuming the play-by-play duties for Irish hoops after Lorri’s retirement in 2006.

Also in 2006, Nolan left WNDU to become a full-time employee on campus as part of Notre Dame Sports Properties, who handled the radio broadcasting rights for Irish athletics and helped lead Notre Dame through its first steps of online video productions. Nolan soon became synonymous with Irish athletics both over the air and online, hosting the Brian Kelly and Mike Brey television and radio shows, checking in from Irish football practices and calling numerous Notre Dame olympic sport events.

Nolan’s radio talents were not just limited to play-by-play or analyst duties. From 1982 through 1999, he co-hosted WNDU’s popular SportsTalk show with the late Jeff Jeffers and was the host of the Official Notre Dame Football Post Game Show for over 25 seasons.

In addition to Lorri and Jeffers as notable long-time colleagues of Nolan, Reggie Brooks and the late Mirko Jurkovic spent several seasons both on radio and und.com as part of his broadcast crew. It was also with Nolan on Notre Dame men’s basketball radio crew that ESPN’s LaPhonso Ellis and Jordan Cornette began their broadcast careers.

Nolan’s tireless work with Notre Dame Sports Properties and Fighting Irish Media was honored in November 2015 when he won the Outstanding Crafts Achievement Emmy for On-Camera Talent-Sports awarded by the Chicago Midwest Chapter of the National Academy of Television Arts and Sciences.

A native of Winchester, Massachusetts, Nolan was awarded an Honorary Monogram by the university in 2013.

COLUMN: After long wait, all states expected to have opportunities for sports, performing arts

Since the shutdown of high school sports and performing arts last March due to the COVID-19 pandemic, each state has... read more