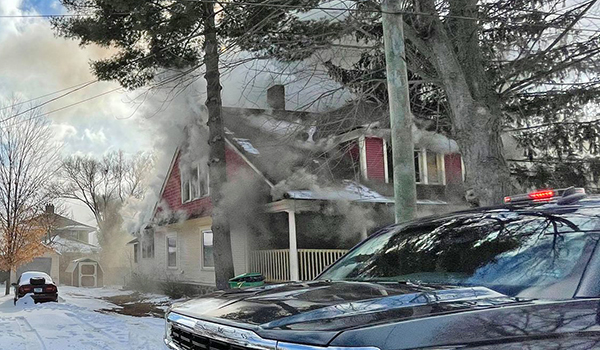 A Dowagiac family displaced by a house fire is receiving an outpouring of support from community members. (Submitted photo)

DOWAGIAC — A family of six has lost most of their belongings following a Tuesday house fire, according to the Dowagiac Fire Department.

At 2:45 p.m. Tuesday, the Dowagiac Fire Department and Wayne Township Fire Department were dispatched to a reported structure fire at 403 W. Telegraph Road in the city of Dowagiac.

The fire was discovered when a teenager from the residence arrived home from school and realized the house was on fire and alerted 911. The last time a family member was at the residence was around noon.

Dowagiac Deputy Chief Robert Smith arrived on scene in two minutes, followed by the first due engine, Smith reported heavy fire conditions on first floor. Flames had just purged out two windows on the right side of the residence. Fire crews encountered and reported severe fire and smoke conditions on the first floor and fire was advancing to the second floor of the “balloon: construction residence, a term for a common older style with no fire stops in the structure walls between floors.

Fire crews worked aggressively to extinguish the bulk of the fire, and the fire was declared under control in about 45 minutes, firefighters reported. Crews from all departments worked in rotation to find and extinguish hot spots.

The structure received heavy fire damage on both floors and is believed to have originated in a downstairs bedroom based on fire involvement on arrival. The cause of the fire is undetermined, and the Dowagiac Fire Department will coordinate efforts with the insurance company investigators to attempt to determine the cause, Smith said. The family had been having electrical issues in the past but this is not conclusive at this time.

The family of two adults and four children are currently living with other family members pending coordination with their insurance company. Most of their clothing and possessions were damaged by the fire conditions.

No injuries to civilians or firefighters were reported, and other agencies assisting at the fire were Pride Care Ambulance, Dowagiac Police, SEMCO Gas and American Electric Power.