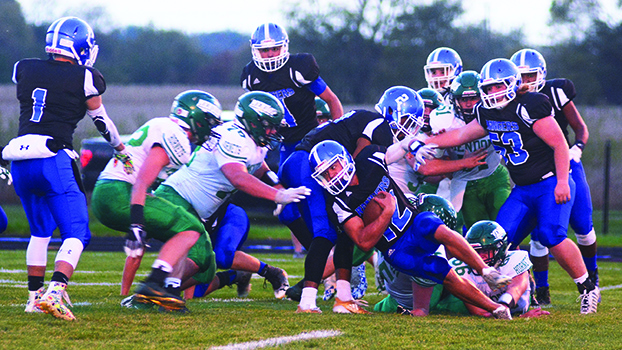 Cassopolis lost another game off its 2021 football schedule as 11-time state champion Mendon announced Monday it was switching to 8-player football starting in the fall. (Leader file photo)

Mendon the latest team to drop to 8-player football

CASSOPOLIS — As if scheduling high school football games was not tough enough, Cassopolis Athletic Director Chad Gardner needs to find another team that competes in 11-player football to round out his 2021 season.

The reason Gardner must find another game is because Southwest 10 Conference member Mendon, an 11-time state champion, has decided to switch to 8-player football starting this fall.

The Hornets join the growing list of teams in the Southwest 10 that have dropped 11-player football. In fact, only the Rangers, Division 8 state champion Centreville, White Pigeon, Decatur and Hartford still play traditional football from that conference.

“I don’t know what is going to transpire,” Gardner said. “It’s just so hard with football right now because the participation level is so much lower, and I don’t know if it’s because of the inherent head injuries or the fear of COVID or the kids not being in school. I’m at a loss.”

While the news of Mendon dropping down to 8-player may be shocking, it is by no means a new idea. The entire Southwest 10 Conference kicked around the idea of the entire league switching two years ago.

Since that time, Bangor, Eau Claire, Bloomingdale and Marcellus all switched to the 8-player format.

With the move, the Hornets join the Tier 1 of the Southwest Michigan 8-Man Football League, along with Bloomingdale, Fennville, Bangor, Marcellus, Martin and Gobles.

KALAMAZOO — The Niles boys bowling team improved to 3-0 with a 22-8 win over host Schoolcraft at Continental Lanes... read more