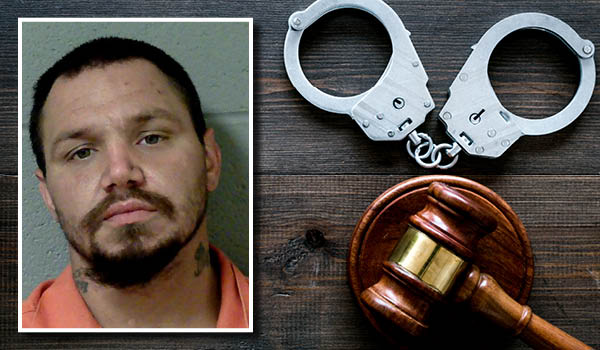 CASSOPOLIS – A Dowagiac man who illegally possessed a firearm twice as a felon was sentenced Friday in Cass County Circuit Court to a year in jail.

Ryan Joseph Ferrier, 32, of Edwards Street in Dowagiac, pleaded guilty in three criminal files and was sentenced to concurrent terms of 365 days in jail on two of them. He received a concurrent sentence of nine months in jail on the third case.

In the nine-month jail term case, Ferrier pleaded guilty to violating his probation from a 2019 resisting and obstructing police conviction by being in possession of a firearm as a felon. In that case, his probation was revoked, and he was ordered to serve nine months in jail with credit for 148 days served.

“This is one of those cases of stupid is as stupid does,” said Cass County Prosecutor Victor Fitz. “The only thing he had to do was not have weapons. He did it once and then a second time.”

In court, Ferrier said he knew he had made a mistake and wanted to change.

“I know I made a mistake. I hung out with the wrong people,” Ferrier said. “I will work and get my kids back when I get out.”

Cass County Circuit Judge Mark Herman noted that Ferrier’s guidelines could have permitted him to impose a short prison sentence.

“You need to appreciate that if you don’t stay away from possessing weapons, the next time will be prison,” he said. “You also need to choose the people you hang out with better.”

Another Dowagiac man was also sentenced to a year in jail on a weapons charge.

Cody Wilson, 25, of Magician Lake Road in Dowagiac, pleaded guilty to carrying a concealed weapon and was sentenced to 365 days in jail with credit for 101 days already served and fines and costs of $1,548.

The incident occurred Oct. 21, 2020, at the intersection of Elzroth Road and M-62 in Edwardsburg. A vehicle he was a passenger in was stopped by police and police found a loaded weapon and discovered that he had bench warrants out for his arrest.

“The key to prison is in his hand. He needs to slow down and straighten up,” Fitz said.

“You have to look at where you’re headed in life,” Judge Herman said. “You’ve spent three years in jail already in your life, and you have some more time to serve. It’s got to be getting awfully old. You need to get on with your life and do what you need to do.”

Uyl updates media, but no date yet for restarting winter sports