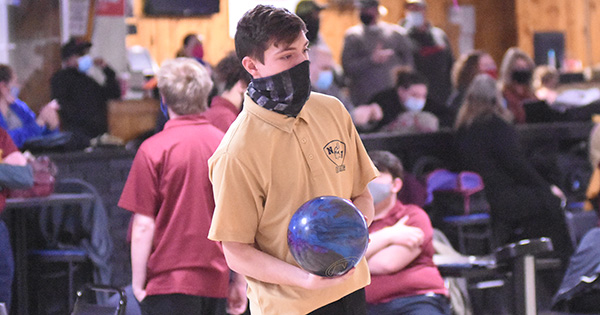 The Niles bowling team improved to 2-0 with a win over Brandywine Wednesday. (Leader file photo)

Bowling teams learn about themselves as season gets rolling

NILES — With virtually no time to practice over the summer because bowling alleys in the state were closed by Michigan Department of Health and Human Services COVID-19 guidelines, and the delayed start of the high school season, teams are having to develop on the fly.

Niles and Brandywine squared off for the second time in three days at Joey Armadillo’s on Wednesday, with the Viking boys team improving to 2-0, while the Brandywine girls team squared its record at 1-1.

The Niles girls team avenged its season-opening loss to the Bobcats with a 16-14 victory, while the Niles boys team improved to 2-0 with a 30-0 win over a short-handed Brandywine squad.

Veteran Vikings coach Jim Jaynes was happy to get some new faces into the lineup on Thursday as he prepares his team for the rest of the season.

“Well, on the boy’s side, we actually got fewer overall pins,” he said. “The place we improved with them was where we were able to start a couple of the new guys and get them some very valuable reps in competition. With the overall unknown of when, or if, someone will be sick or in quarantine from contact, we felt it would be very beneficial to keep a few more players than we generally would and not labeling them as bench players.

“As you know, anyone can practice, practice, practice, but until you understand what actually happens when you are asked to perform, no one can gauge where you are at ability wise under the pressure of the game with parents, teammates and coaches all looking at you. All the boys did an amazing job and understand why we pull players when we do as to look out for them and to give them breaks.”

Niles won the Baker Matches 211-60 and 219-59. In regular matches, the Vikings defeated the Bobcats 1,685 pins to 707 pins. Brandywine had just three bowlers available for Wednesday’s match.

Sean Tweedy led the Bobcats with a 256 series with a high-game of 137.

The Niles girls team added a veteran to its lineup on Wednesday, which helped the Vikings avenge its loss to the Bobcats.

“The girl’s side of things is an excellent example of the unknown,” Jaynes said. “We were able to get one of our last-season returning players to compete, and the experienced player performs as expected for it being the first time she has rolled the ball. She was under quarantine for possible contact and missed the first two practices and Monday’s meet. Communicating with coaches as to when she would be available during this time was crucial as we feel any student/athlete should not be punished for something beyond one’s control.”

The Bobcats were led by Brianna Leeper’s 298 series, which included a high-game of 180. Natalie Adams finished with a 281 series, Melanie Vazquez a 257 series, and Rana Adams a 245 series.

Niles and Brandywine split the Baker Matches with the Vikings winning the first 152-126, and the Bobcats winning the second one 159-116.

“Going forward with both teams, we just have to get more valuable practice in, work on some fundamentals and drills to improve consistency, and try to improve while growing stronger as a team,” Jaynes said.