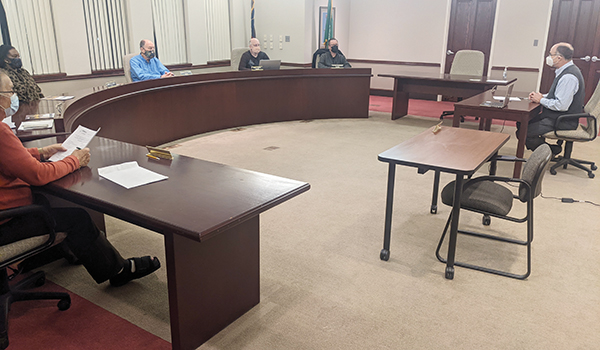 DOWAGIAC — Sections of two Dowagiac streets will be receiving much-needed maintenance this year.

The Dowagiac City Council approved a resolution authorizing a contract with the Michigan Department of Transportation for repaving portions of Pokagon Street and Jefferson Avenue during Monday’s meeting at City Hall.

According to a memo to the city from City Manager Kevin Anderson, MDOT allocates money to small urban areas that must be used on major roads identified in planning documents. Pokagon /Jefferson from M-51 to Cass Avenue is one of the roads that qualifies for small urban funding. Jurisdiction for this portion of the road is shared with Cass County, and in May 2020, the council entered into a cost sharing agreement with the Cass County Road Commission for the local cost share of this project.

The project is both bid and managed by MDOT, and the city will reimburse the state for costs incurred as the project progresses. Anderson said this project was bid on and came in well under budget due to oil prices being relatively low right now and added that the project is anticipated to start in mid to late summer 2021.

“The agreement before council is a standard MDOT agreement that is required to receive funding,” Anderson said.

The council also authorized a resolution that schedules a public hearing on Michigan Department of Natural Resources Trust Fund grant applications for Feb. 8.

The city plans to apply for the development of Riverside Park along Riverside Drive.

The project includes the creation of an overlook platform at the dam at Riverside Drive as well as other site improvements, including eight new parking spaces along Dave Underwood Drive, an accessible sidewalk from the parking to the bridge, a sidewalk south of Dave Underwood Drive to connect to the existing sidewalk network, a fishing platform/overlook at the level of the walkway beneath Riverside Drive and an accessible route to the platform.

Future phases may include stone to the area beneath the falls and a boardwalk/overlook east of the bridge. The project would cost an estimated $431,000, according to engineering consultant firm Wightman.

In other business, the council approved a resolution for the City’s intention to apply for funding and to approve a projected 2022 Dial-A-Ride budget.

“While we operate under a master contract for these funds with the state, we still need to apply for funding on an annual basis and include budget projections,” Anderson said.

The DART Local Advisory Committee has recommended a proposed budget for approval. As projected, the state share of the budget is projected at $74,646 and the Federal share at $36,520 on a total budget of $202,890. Last year’s DART budget operated with $215,970.

DOWAGIAC — A Dowagiac business has been fined for not enforcing COVID-19 workplace safety precautions. Friday, the Michigan Occupational Safety and... read more