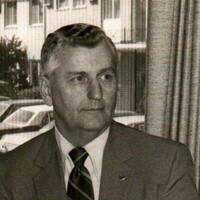 He is the son of Eston and Vera Johnson raised on a farm in Penn Township. He attended Allegheny Country Schools and graduated Cassopolis High School Class of 1938.

He graduated Michigan State College in 1949 with a degree in dairy manufacturing.

Worked for MMPA for 34 years in several positions including managing plants in Ovid and Imlay City.

In Imlay City, he met and married Marlene Jahn, and they were together 68 years.

He will be laid to rest in Youngs Prairie Cemetery in Penn Township, Cassopolis, Mi.

To send a flower arrangement or to plant trees in memory of Francis E. Johnson, visit sheltersfuneralhome.com.