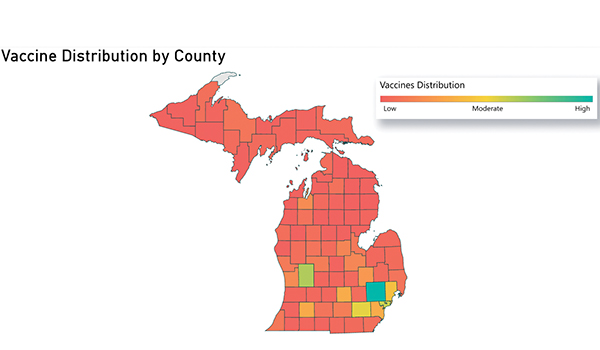 SOUTHWEST MICHIGAN — Last week, Cassopolis resident Jim Bronke sat down at this computer and decided he was ready to get the COVID-19 vaccine.

At 70 years old, Bronke qualifies for the vaccine under Michigan’s phase two, which allowed teachers, first responders, childcare providers and residents 65 years old and older to receive their first dose on Jan. 11. Despite his qualifications, when Bronke went to put his name on Cass County’s virtual COVID-19 vaccine waiting list, he was met with a message that surprised him — more than 11,000 qualified residents were in line ahead of him — and the county had only received a fraction of the vaccines needed to meet that demand.

“I thought, ‘oh, this is looking like it’s going to take a while,’” Bronke said. “It concerns me because we want the economy to rebound. We want people to go back to work, and the slow process [the vaccine] is making will probably delay that.”

Bronke’s experience was far from unique. As of Thursday, Michigan was ranked as 30th among states in terms of vaccinations per 100,000 people, according to data compiled by the Centers for Disease Control and Prevention.

As a result, counties across Michigan have been experiencing vaccine shortages, receiving far less than what they had ordered from the state, which administers vaccines based on an allotment from the federal government.

According to local health departments, the slow vaccine roll out and lack of communication from the state and federal governments has hindered vaccine distribution in southwest Michigan and left staff scrambling.

By the end of this week, the Van Buren/Cass District Health Department, which serves Cass and Van Buren counties, will have only received 1,500 total vaccines, despite repeated orders for up to 1,800 additional vaccines. From Dec. 23 to Jan. 16, the department had only received 700 doses of vaccines.

“It’s been significantly lower than what we hoped to receive,” said Danielle Persky, deputy health officer and health promotions director for the VBCD Health Department. “We aren’t the only ones. That’s really been seen across the state. It’s been felt really everywhere.”

More than 14,000 residents in the two counties had signed up for the health department’s vaccination waiting list as of Monday. A total of 92,000 residents in the district will qualify for the vaccine once Michigan opens vaccine distribution to all individuals over 16.

Across county lines, the Berrien County Health Department is working with Spectrum Health Lakeland to distribute vaccines. In the last week, the partnership administered COVID-19 vaccinations to approximately 1,000 people per day, the health department reported. As of Thursday, more than 7,000 vaccinations had been given by the health department to health care workers, emergency medical and first responders, and long-term care residents, as well as those who are at highest risk for severe COVID-19 illness due to risk factors, such as age or exposure due to occupation, according to Gillian Conrad, communications manager for the Berrien County Health Department.

“We are well on our way with vaccine distribution to all of the eligible populations,” Conrad said.

Despite its efforts, Conrad said the demand for the vaccine far exceeds the supply in Berrien County. To date, more than 19,000 older adults have expressed interest in being vaccinated via the Berrien County Health Department and Spectrum Health Lakeland vaccine surveys.

“All of our efforts are wholly dependent on the supply of the vaccine that we are allotted from the state. That continues to be one of the limiting factors in our ability to get more vaccine out faster,” she said. “We just don’t have enough vaccine for everyone interested in receiving one, especially in those newly eligible groups, like adults over the age of 65.”

In addition to a shortage of vaccine supply, Persky said health departments are given short notice of when and how many vaccines it will receive, which leaves staff stretched thin as they have to plan vaccine clinics on a short time frame to ensure no doses go to waste.

“We have to be looking ahead because we don’t know week to week what we will be given,” she said. “It’s extremely difficult. This week we had to turn around and plan two big clinics and get invitations out within a day. It’s a lot of last-minute scramble. It’s like ‘Groundhog Day’ over and over again. However, we have a very seasoned staff, and we are very ready to move at a moment’s notice.”

With more manufacturers working on COVID-19 vaccines and new leadership at the federal level, both Persky and Conrad are hopeful more vaccines — and a more regular schedule of delivery — will be coming soon to southwest Michigan. Until then, they urged residents to remain patient and research all vaccine providers through their health systems.

“There is a very large number of people who are interested in getting the vaccine right away, but with the kind of trickle we have been getting with the vaccine, it’s going to take some time,” Conrad said. “This is going to take weeks, not days. We understand that is frustrating, and people are eager to get the vaccine as fast as they can. We are just urging patience.”

One who will be waiting patiently will be Bronke, who said he would be excited for the day he opens up his inbox to find a message that he will receive the vaccine.