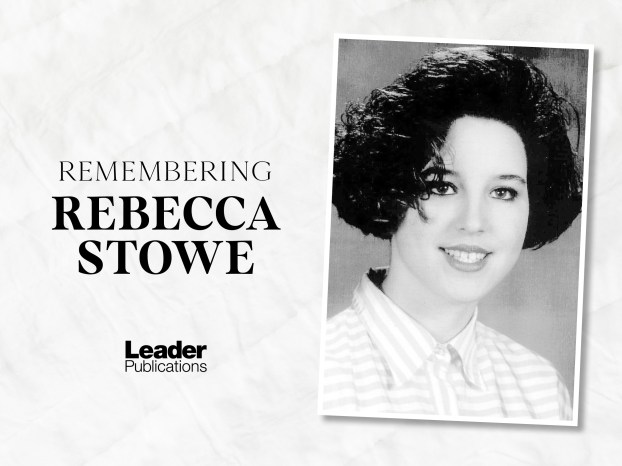 After driving hours from Niles for a Christian rock concert and camping trip with a group of friends, the carload of teenagers was tired from the drive, soaked from the rain and cranky over the ruined trip.

Her sister, Rebecca “Becky” Stowe, however, stood smiling in the rain as she talked to new friends who had also traveled at the concert.

“She could go anywhere and make a really horrible situation fun,” Slates said. “She loved to seek out fun wherever she went.”

As Slates recounted this memory Wednesday, Robert Leamon III was preparing to spend his last night in prison.

Leamon, now 44, was convicted of first-degree murder in 1997 after strangling Stowe, who was pregnant, and burying her on a relative’s farm in the summer of 1993. During his trial, Leamon, 16 at the time of the murder, said he was upset that Stowe, then 15, refused to have an abortion.

Two years after her death, Stowe’s body was found in rural Cass County.

Although he was originally sentenced to life in prison, Leamon became eligible for resentencing in 2012 when the U.S. Supreme Court ruled in Miller v. Alabama that sentencing juveniles to life in prison was unconstitutional. Leamon was resentenced to 25 to 60 years in prison in March 2020, and despite multiple appeals, was granted parole in December to be released Thursday, Jan. 14.

“I knew this was going to happen, and I’m very let down by the judicial system,” Slates said. “Basically, juveniles can commit a heinous crime like premeditated murder and no longer spend life in prison.”

During his resentencing hearing in August 2019, Leamon’s mother, Kathy Opick, took the stand to tell the judge her son was reformed and had worked hard to better himself.

“This might be selfish, but I would love to see him have another chance,” Opick told the court on Aug. 1, 2019.

Richard Stapleton, a former retired leader from the Michigan Department of Corrections, said Leamon had a “very good prison record,” and that he had been excellent in terms of disciplinary matters and program performance.

During the same hearing, Angela Crocker, who dated Leamon after the murder but before the body was found, said Leamon had hit her, put her in a head lock and made her fear for her life. Though Leamon said the claims were untrue, Prosecutor Victor Fitz argued that Leamon was echoing the deceitful behavior he displayed as a teenager.

Thursday, Leamon was released from a prison in Muskegon, and will live with his mother at her home in Granger.

Although she was 26 with a family of her own when her sister was killed, Slates still remembers Stowe as a happy, giving, friendly teenager 28 years later.

“To lose her has been an incredible loss,” Slates said. “It caused a lot of pain and suffering. Life would have been different for my whole family if she was here.”

Through tears, Slates said her oldest son, now 32, remembers his Aunt Becky fondly, but Slates wishes her sister had lived longer so that both her sons would have known her.

“She had a child growing inside of her belly,” Slates said. “I would have known my little niece or nephew had he not taken her.”

Though Slates never met Leamon, she said she remembers a day when her sister told her about her new boyfriend “Rob.”

“She said, ‘I have this new boyfriend. His name is Rob,’” Slates recalled her sister saying. “’He’s really cute. He’s a football player. Mom really likes him.’”

A close friend of Becky’s who has often attended court proceedings and advocated for her friend helps to manage a Facebook page dedicated to keeping Stowe’s memory alive. This page manager asked to remain anonymous for fear of repercussion.

“Becky was a living, breathing, vibrant young woman who was loved dearly by her family and friends,” the friend said Wednesday afternoon after hearing the news of Leamon’s release. “Robert Eugene Leamon III planned her murder and took her and their unborn child’s life, lied about it, covered it up and only got caught when told on by someone he threatened and intimidated into silence for 18 months.”

For years, Slates has advocated on behalf of her deceased sister, testifying at trials, sharing victim’s impact statements and working with Cass County’s victims’ impact team through the appeals process.

Although she feels betrayed by the legal system, Slates said she still focuses on positive memories of her sister.  Angry with the decision, Stowe’s friend echoed the desire to maintain good memories.

“The state of Michigan parole board covertly set [Leamon] free, robbing Becky’s family and friends from a chance to explain why there is no rehabilitation for the mind who does what Robert did,” she said. “There really isn’t anything else to say. It doesn’t change the injustice of this outcome. All we ask is that Rebecca Lynn Stowe is remembered in a positive light, and we will continue to keep her memory alive.”