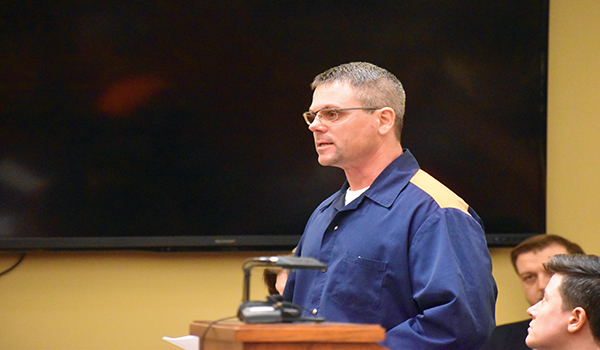 Robert Leamon III speaks before his resentenciing hearing at the Cass County Law and Courts Building. He has been in prison for more than 25 years after he killed Rebecca Stowe in 1993 when he was 16. A year ago, he had his life without parole sentenced reduced to 25 to 60 years with the possibility of parole. (Leader photo/BEAU BROCKETT JR.)

Defense attorney Sofia Nelson and Michigan Parole Board Chairman Brian Shipman said Wednesday that Leamon was scheduled to be released from prison Thursday morning. He will be on parole supervision from the state of Indiana and will be living with his mother and stepfather in Granger. Wednesday’s hearing was held virtually.

Leamon, now 44, was convicted of first-degree murder in 1997 of the 1993 murder of his then girlfriend, Rebecca Stowe, in rural Cass County. The two were students at Brandywine High School in Niles and the murder took place in rural Cass County. Stowe’s body was not found and Leamon was not arrested until over two years later.

Leamon had been 16 at the time of the murder and was eligible for a resentencing under the 2012 U.S. Supreme Court ruling that a life without parole sentence for “juvenile lifers” is unconstitutional except in rare circumstances.

Leamon got the chance to be resentenced after Cass County Circuit Judge Mark Herman ruled exactly a year ago Wednesday that an August 2019 hearing showed that Leamon was not irredeemable and could be rehabilitated. Judge Herman sentenced Leamon on Jan. 30 to a minimum prison term of 25 years in prison.

As noted by Fitz Wednesday, his attempt last March to meet with parole board officials was canceled due to COVID-19 pandemic restrictions and his office had expected to be contacted to reschedule the meeting before a parole decision was made.

Fitz said his office learned subsequently that Leamon’s first opportunity to be paroled was denied on May 4, 2020, without any input from his office. They then were informed by the victims in the case that Leamon had in fact been granted parole at a late October parole hearing.

Fitz said his office didn’t think parole would be considered again until mid-March. When they learned of the October parole board decision, they contacted Michigan Department of Corrections officials on Dec. 11, had a Zoom meeting with the parole board chairman on Dec. 23 and received packets of information from them on Dec. 30.

He described the Dec. 23 meeting with Shipman as primarily procedural with his office not able to present any new information for consideration. He said he has “substantive” information as to why Leamon shouldn’t be paroled that he so far hasn’t been able to offer.

Wednesday, Judge Herman denied Fitz’s motion for a stay in the parole board’s order allowing Leamon’s parole on procedural grounds. He agreed with Nelson that he did not have the authority to grant the stay.

Nelson said Fitz’s misunderstanding of the law and misreading of documents are not valid grounds to be granted leave to appeal.

Herman said court rules required an appeal be filed within 28 days in the initial parole decision in late October. Even taking Fitz’s word that his office didn’t get notice until Dec. 11, Herman said the 28-day period has expired.

Wednesday’s hearing featured much discussion about the parole process and who must be notified of hearings and deadlines. Shipman testified that the law requires that victims be notified of parole hearings but that any notice to prosecutors and others in the public would be a courtesy only.

Shipman said that while Leamon’s initial parole request was denied for a year last May and backdated to March 16, 2020, the parole board doesn’t wait until the year is up before considering the matter again. He said the process usually begins six to eight months prior to the parole eligibility date.

He acknowledged that while the board received no renewed request from Fitz to have any rescheduled meeting, the board also gave them no notice of Leamon’s October parole hearing date.

NILES – Niles has frozen over. The ice has arrived. As beloved community events have been canceled or altered throughout... read more