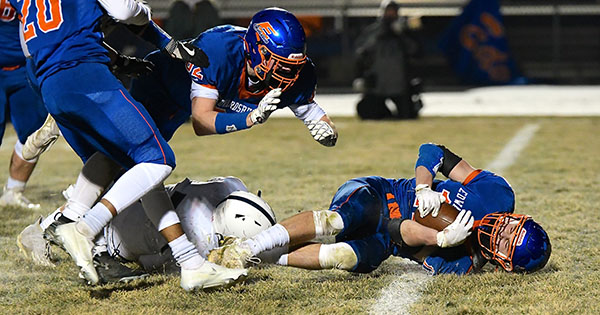 EDWARDSBURG — For the fifth time since 2014, the No. 1-ranked Edwardsburg football team is a regional champion.

Whether playing in Division 3 or Division 4, like it did Saturday night at Leo Hoffman Field, the Eddies have been a dominant force in high school football.

Visiting Grand Rapids South Christian found out just how dominant the Eddies can be, as Edwardsburg turned an 8-7 advantage in the second quarter’s opening moments, including a 24-14 halftime advantage en route to a 47-7 victory in the Division 4 Regional championship game.

The title will be a memorable one for Edwardsburg, which like every team still alive in the state playoffs, it played its first football game in January. Despite 57 days off since their last game, the Eddies looked anything but rusty.

Led by Drew Bidwell, who earned Division 4 All-State honors on defense during the hiatus, Edwardsburg amassed 308 yards of total offense, all on the ground, while holding the No 5-ranked Sailors to a total of 147 yards of offense.

Bidwell scored three times and rushed for 54 yards on 10 carries. His touchdown came on runs of two, one and 16 yards. Fullback Jackson Hoover led the Eddies’ rushing attack with 65 yards on eight carries and a touchdown run of 19 yards.

Gavin Houser, who scored the game’s first touchdown on a run of 30 yards, finished the night with 61 yards on six totes.

The Eddies led 8-0 after one quarter, and by 10-points by halftime. When Edwardsburg exploded for 20 third-quarter points to increase its advantage to 44-7, there was no doubt about the outcome.

The Eddies, who rarely punt or kick extra points, capped the regional title with a 40-yard Trevor Houseworth field goal.

As impressive as the Edwardsburg offense was, the defense played just well despite the layoff.

South Christian (8-2) came into the game with a pair of outstanding quarterbacks, including Ty Rybrandt, who returned from a broken collar bone suffered in the pre-district round of the playoffs.

The Eddies were able to put consistent pressure on the Sailors’ quarterback, who went 10-of-26 for just 93 yards. Trevor Hansen, who scored South Christian’s only touchdown on the opening play of the second quarter, finished with 59 yards on nine carries. The Sailors managed just 56 yards rushing.

Bidwell and Tanner Hursh spearheaded the defense with 3.5 tackles each, including three solo. The pair also combined for three tackles-for-loss.

Logan McColley, who had a 1-yard touchdown run, had three tackles.

Edwardsburg will now host Cadillac, a come-from-behind 27-23 winner over Forest Hills Eastern, on Saturday at Leo Hoffman Field. No kickoff time has been announced.