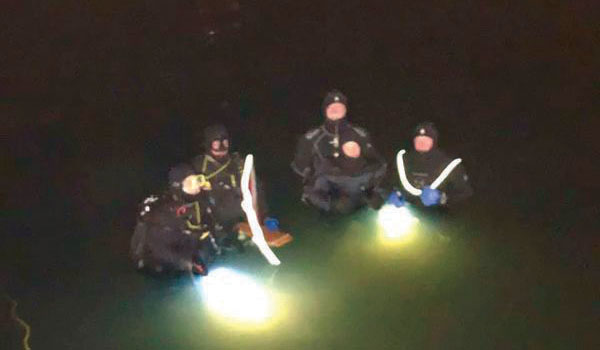 NILES — Five scuba divers took a plunge just before midnight on New Year’s Eve into the St. Joseph River in Niles and surfaced in 2021.

The Michigan Underwater Divers Club has made a tradition of hosting a scuba dive at midnight in the region for decades diving into bodies of water like the St. Joseph River and Little Paw Paw Lake in Coloma. This year the group chose to dive into the St. Joseph River near the Wonderland Cinema in Niles.

“When we got out and dripped, it froze into black ice,” said MUD Club charter member Larry Steelman of the boat dock they came back up at. “We stayed off to the side. We were really careful.”

Steelman has participated in all but one or two Near Year’s Eve dives the MUD Club has organized through the years.

“There were five divers in the water to begin the dive, and most importantly, five out,” said MUD Club charter member Don McAlhany.

Mary Beth Thar, of Niles, Larry Steelman, of Niles, Kevin Ailes and Amy Ailes, of Bangor, and McAlhany, of St. Joseph, all too took the plunge into the river to bring in the new year. Jake Thar, of Niles, Karen Mann, of Bangor, provided shore support to ensure everyone was safe in and out of the water.

“The divers had a bit of a challenging dive,” McAlhany said of the New Year’s Eve dive. “With the river actually lower than last year, and having to walk out to deeper water without fins, the current was slow. Even with lights, visibility was very limited.”

Steelman said the dives usually last between 10 to 15 minutes if visibility is low, but sometimes they stay for New Year’s Eve as long as 30 minutes if it is a clear night.

“We’re already in the water and went to the trouble of getting suited,” he said.

McAlhany said the club has been diving the St. Joseph River in the Niles area since the club started in 1972.

The club members view diving into the river as sort of a treasure hunt, where they find everything from shopping carts to antique bottles to pull out with them.

The club has not been able to meet regularly due to COVID-19, but continues to be active through activities like the New Year’s Eve tradition.

The club members are all Basic Scuba certified, and most are certified in Advanced Open Water diving.

McAlhany said river diving can be dangerous due to many factors, including entanglement, snag and impalement hazards.

Of the cold weather, Steelman said the suits guard against most of the chill. The club members diving in the winter are not what he called “fair weather divers.”

For those interested in learning more about the MUD Club, information may be found at Mudclub.Scubaobsessed.com.