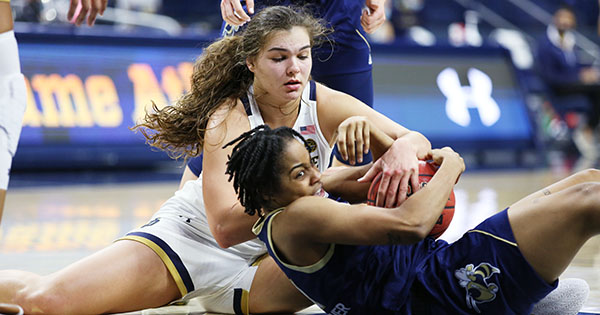 The Kettering, Ohio native is now a two-time winner of the league’s weekly freshman honor and the first player in the conference to win twice.

Westbeld played a key role in Notre Dame’s back-to-back wins over Miami (71-60) and Georgia Tech (69-67) this past week. Westbeld was highly efficient down in Florida, shooting 7-of-12 from the field to finish with 15 points and seven rebounds. The first half also saw a sequence in which Westbeld and Destinee Walker combined to score 17 straight points for the Irish and ultimately totaled 19 of the team’s 31 first-half points.

Next, the super freshman helped the Irish get revenge against the Yellow Jackets, recording 11 points on 5-of-12 shooting to go with her five rebounds. One of her bigger baskets of the game occurred right before halftime, when she connected on a 3-pointer at the buzzer to pull the Irish within four, giving the home squad some momentum for the second half.

Westbeld and the rest of the Irish return to action at 8 p.m. tonight at Boston College. The game can be seen on the ACC Network.