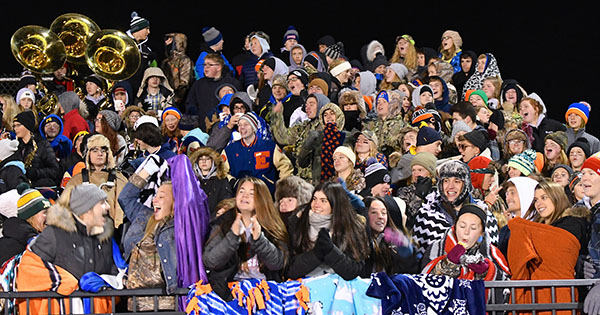 The MHSAA announced Wednesday that a limited number of fans will be allowed for the conclusion of the state playoffs. Schools will get 125 tickets for immediate families only. (Leader file photo)

EAST LANSING — Limited numbers of spectators will be allowed for the final rounds of the Michigan High School Athletic Association football and girls volleyball tournaments, per approval received today from the Michigan Department of Health and Human Services.

Spectators in different households must be spaced out by 6 feet and maintain distancing at all other times including arrival and departure from the game facility. Spectators also must wear fact masks at all times.

The Lower Peninsula girls swimming and diving finals will conclude that sport’s season Jan. 15-16 at three sites. However, spectators will not be allowed at those events because those meets will include much higher numbers of participants, and adding spectators would push the total number of people in attendance past what is considered safe for indoor events.

All three swimming and diving finals, as well as the volleyball semifinals and finals will be streamed live on MHSAA.tv. FOX Sports Detroit will broadcast all football finals – that schedule for streaming and cable will be announced closer to those events.