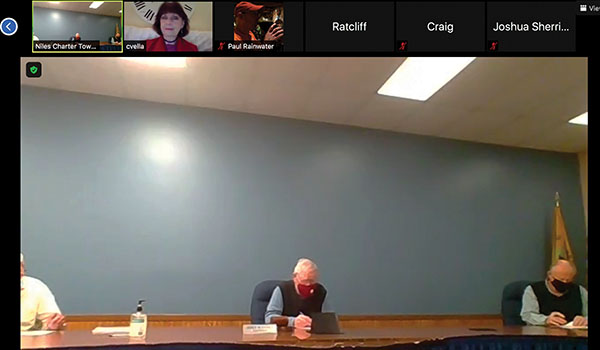 NILES TOWNSHIP – The path is opening up for firefighters within the Niles Charter Township Fire Department — and outside of it — to throw their helmet in to see if they will be considered to be the department’s next fire chief.

During Monday evening’s meeting of the Niles Township Board of Trustees, the township declared it was planning to officially start its search for a new fire chief after months without one.

The Niles Charter Township Fire Department’s previous fire chief, Gary Brovold, retired after 37 years in the fire service, with 16 of those as fire chief for the department. The township department has been rotating the chief’s responsibilities through the end of 2020. During the first week of January, Lt. Tim Jesswein was appointed as interim fire chief of the department until a permanent chief is found.

“At the meeting in December, the board appointed Tim to serve as interim chief,” said treasurer Jim Ringler. “My understanding is that Lt. Craig Lear would carry over a couple days there, so that Tim would actually start [Monday].”

Ringler said there was a memorandum of understanding between the Niles Township Board and the local firefighters’ board as an understanding that Jesswein would be taking the interim chief position temporarily.

“We will start the hiring process for a full-time chief,” Ringler said. “If Tim wasn’t selected as full-time chief, he will go back as a firefighter in the same status and role as he was in before he took the job.”

Josh Sherrick, a career firefighter with the department, confirmed at the virtual meeting he had the memorandum of understanding and will be speaking with the board Tuesday.

The members of the board agreed to both consider qualified candidates internally from the Niles Charter Township Fire Department, in addition to outside candidates.

Trustee Chris Vella raised the question as to whether the board might change the job description to include a preference for someone with an associate’s degree in a related field.

“I’m a believer in education,” said Clerk Terry Eull. “I think we can say ‘preferred, but not required.’ We would prefer that, but I would hate to turn away a very qualified applicant just because they didn’t have that qualification.”

Ringler confirmed the original job description made no mention of a higher degree necessary, outside of education required to become a firefighter.

“I think degrees can be helpful, but all by itself, it is not necessarily any indicator that they would make a good chief,” Ringler said. “We could have that requirement, but we’ll not limit the pool.”

Ringler noted a combination of things he felt make a good chief, which was experience within a fire department, being able to handle personnel and management of the department. He also noted writing and speaking well as important.

“It’s not just experience, and certainly not just a degree that would make you a good chief,” Ringler said. “I’m sure there are people who have both who wouldn’t do well. Sometimes, it’s more about organizational structure and those types of things.”

Earlier in the meeting, the board members discussed moving forward with a special assessment district approved in the past on Evergreen Road. The project to improve the section of the road had been approved and is now being fast tracked as its progress was slowed down last year. The section is said to be about one third of a mile long.

“The action taken on Monday evening was to hire an engineer,” Ringler said.

NILES — The YMCA of Greater Michiana is hoping to help residents kick 2020 to the curb. The YMCA of... read more