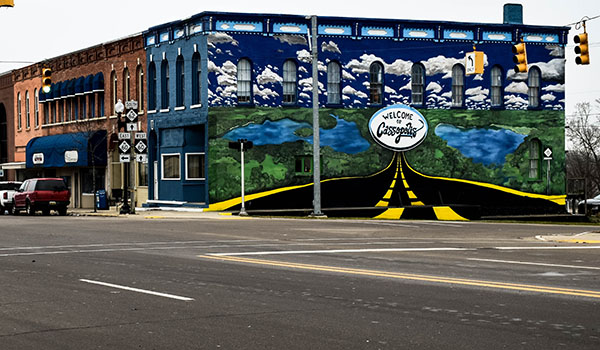 Cassopolis leaders look back on a successful year

CASSOPOLIS — With 2020 now in the rearview, the village of Cassopolis is looking forward to a new year.

Before the calendar switched over into 2021, Village President David Johnson took a glance back at what Cassopolis achieved in 2020 and what residents can look forward to in the new year.

The first accomplishment Johnson listed was the new village municipal complex. Opened in October, the new facility at 121 N. Disbrow is now home to all city departments, including police, administration, public works and city council chambers. In the works for more than two years, the project cost $2.8 million.

At the time of the building’s opening, Village Manager Emilie Sarratore said the new facility would save the village money in the long run and allow staff to serve residents better.

“That took a very disjointed group of buildings and departments and brought them all together into one house,” Johnson said. “It makes it more convenient for all of our staff to work together and stay in contact.”

Also in 2020, the village made significant process on its streetscape project. The project got its start in 2018 when Cassopolis teamed up with the Cass County Board of Commissioners to Imagine Cass by partnering with Michigan State University’s Sustainable Built Environment Initiative Team. The program, formed by the university in 2013, is designed to help Michigan municipalities address physical planning, design and land use concerns.

Since then, the village has poured millions of grant dollars into the project. In the past year, village staff has been hard at work paving roads, redoing sidewalks and installing a pier at a new beach area. Despite significant construction delays due to the COVID-19 pandemic, both Johnson and Sarratore said the project is on track.

“Our downtown is looking beautiful,” Johnson said. “You can see the work put in. You can see how good it is going to look.”

Outside of the downtown, the village entered into a conditional transfer with Penn Township regarding the land where Midwest Energy and Communications sits on Decatur Road. Johnson believes the move will open up more industrial business opportunities in the village.

With all that the village accomplished in 2020, Johnson said his goal for 2021 is to build off the past year’s momentum.

One of his top priorities is attracting new businesses to the industrial park, a task he believes will be made much easier due to the work Cassopolis has put into redevelopment.

“Our strategy has been beautifying the downtown area and opening up Stone Lake, making sure we have space for people to build homes,” Johnson said. “That way, when we expand the industrial park, we not only have a beautiful downtown, we have a place where executives and people working there can building or purchase homes in the village. We want employees to have a place to live and raise their families. Many places will have businesses, and then they will try to develop a place for those employees. We decided to intentionally go the opposite way by building the infrastructure first.”

Despite the difficulties of 2020, Johnson said it was a successful year for the village. Now, he looks forward to the new year and hopes residents are as well.

“Even though we are in the midst of a pandemic, our community is still thriving and moving,” Johnson said. “To me, that’s very exciting.”

CASS COUNTY — After years of research, one Cassopolis native has published a book about Cass County’s ties to the... read more