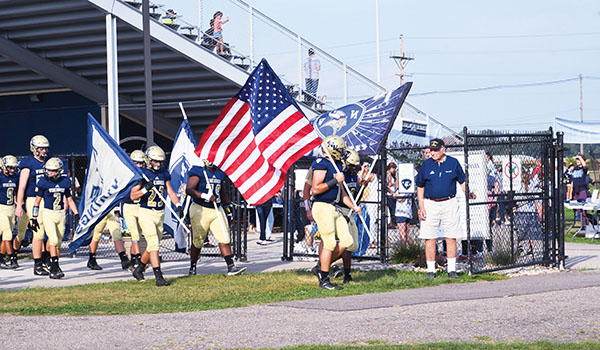 Niles Community Schools will join the Wolverine Conference beginning in the fall of 2021. (Leader file photo)

2020 in review: More action off the field than on this past year

Editor’s note: Leader Publications has put together a list of the top 10 sports stories this year. Here are stories four through two. The No. 1 story of the year will appear on Friday.

DOWAGIAC — Some of the biggest news about high school sports came off the field in 2020.

From COVID-19 delaying, stopping and even canceling seasons to the return of one of the state’s best football rivalries. Even if games were not being played, there were plenty of things for sports fans to talk about at the water cooler.

Here are stories four through two:

Area football fans were excited to hear that Niles and Dowagiac would renew their football rivalry after 13 years. They were even more excited to find out that it would not be just a one-year deal as the Vikings announced they would be leaving the BCS Athletic Conference after one year to join the Wolverine Conference in 2021.

For the better part of nine years, Niles Athletic Director Jeff Upton and Dowagiac AD Brent Nate have been trying to figure out how to get the two schools to play each other more often in all sports.

On June 15, Niles Community Schools accepted an invitation to join the Wolverine Conference.

In the fall of 2019, Niles announced it was leaving the Southwest Michigan Athletic Conference to join the BCS Athletic Conference, with such local teams as Brandywine, Buchanan, Berrien Springs and Bridgman. The Vikings will play the 2020-21 season in the BCS, except football, where they will be playing an independent schedule, which will include Dowagiac for the regular-season finale.

“It has been our goals, and it is not just me, but my superintendent and my principal, everyone wants it,” Upton said. “For that football rivalry to end in 2006, and we play them in other sports, but I think both communities thrive for that [football] to be a part of that. I think it will bring some life back to both communities.” 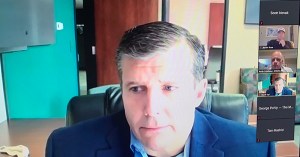 MHSAA Executive Director Mark Uyl has spoken several times with the media via Zoom to update where sports stood during the pandemic. (Leader file photo)

The Michigan High School Athletic Association announced Sept. 3 that football would be played this fall after all after months of that question hanging in the balance.

The announcement came following Michigan Gov. Gretchen Whitmer’s Executive Order 176 lifted restrictions such as the opening of gyms and pools in the remaining areas of the state that had remained close.

The governor did, however, recommend that contact sports not be allowed to compete.

“We are thankful for the opportunity for kids to get back on the field in all fall sports, and we appreciate Gov. Whitmer providing that opportunity with Executive Order 176,” said MHSAA Executive Director Mark Uyl. “We share the governor’s priorities of putting health and safety first, and the COVID-19 guidance and protocols designed by the MHSAA at her request have led to the safe starts in all sports across the state.

“Thirty-three other states are currently participating in all fall sports, and the MHSAA and its member schools are committed to doing this as safely as possible. We are ready to again provide those experiences to students and communities that have hoped for a return of some normalcy. Given the challenges of online education in many school districts across the state, providing sports and a daily routine may be more important than ever in motivating students and providing a safe outlet for physical activity, competition and socialization.”

A limit of two spectators per participant had been placed at that time for outdoor and indoor events for those regions in Phase 4 of the MI Safe Start Plan.

The 2020 season began Sept. 18 and was a six-game regular season, beginning with teams’ originally-scheduled Week 4 opponent. All teams in both 11- and eight-man football qualified for the postseason, unless there was an issue with COVID or a school decided not to participate.

The Michigan High School Athletic Association announced April 3, that the remainder of the winter sports season, as well as the entire spring sports season, had been canceled due to the “state of disaster” directive issued by Michigan Gov. Gretchen Whitmer on April 2.

“We are heartbroken not to be able to provide these opportunities for Michigan’s student-athletes, and especially seniors. We continue to hear from dozens asking us to hold out hope. But safety always must come first, and Gov. Whitmer is making courageous decisions to safeguard the people of our state,” said MHSAA Executive Director Mark Uyl at the time. “We understand as much as anyone how much school sports mean to athletes and their communities. We had ideas and hopes for finishing winter and spring and helping bring some sort of normalcy after this long break, but this is the correct decision, and we will play our part in bringing schools and communities together again when the time is right.

“For now, we cannot state strongly enough that all students, staffs and others follow the guidelines established to slow the spread of this virus — we all must do our part.”

The cancellation of high school sports is not unprecedented. The MHSAA did not hold state finals in multiple sports in 1942-43 during World War II.

The MHSAA’s Representative Council approved during its winter meeting on March 27 a series of concepts for completing the winter tournaments and an abbreviated spring season, contingent on the lifting of a statewide quarantine. The closure of school buildings into June made those possibilities void.

CASSOPOLIS — Amidst a year of financial and health hardships for Cass County residents, Helping Hands of Cass County was... read more