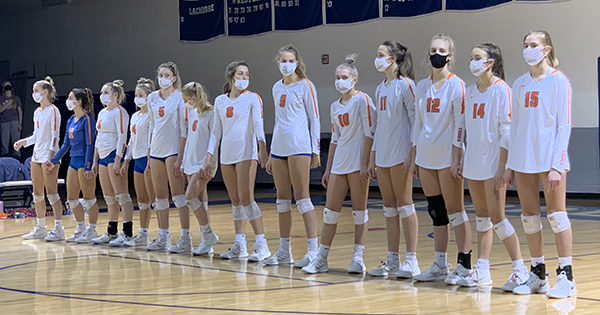 The Edwardsburg volleyball team will be back in the gym on Monday to prepare for its Division 2 quarterfinal match on Jan. 12. (Leader file photo)

EDWARDSBURG — The Edwardsburg volleyball team can return to the court to begin practice for its Division 2 state quarterfinal match against No. 1-ranked Grand Rapids Christian on Jan. 4, according to the Michigan High School Athletic Association.

“Well, we are starting cautiously,” said Edwardsburg coach Nikki Bush. “There have been so many changes, being allowed to start, then stopped and pushed back, I think it’s hard to believe we’ll actually be able to finish.”

The MHSAA Monday afternoon announced the restart dates for the state tournament, which will be completed on Jan. 16 with the finals at Kellogg Arena in Battle Creek.

Like their football counterparts, the Eddies will have to take part in the Michigan Department of Health and Human Services’ rapids testing pilot program.

“Athletes, coaches and other team personnel directly involved in practice and competition must test three times per week using BinaxNOW antigen tests that produce results within 15 minutes,” read the statement by the MHSAA. “Teams and individuals in both sports must complete one round of negative COVID-19 tests before beginning practice.”

Bush has some concerns about restarting.

“I think the biggest frustration was MHSAA pausing after our regional win,” she said. “We could have gotten at least the quarterfinal match in. It takes all season to build to play at the level we were. A seven-week break, and one week of practice, is definitely not going to show the best skill level of our team or any team. Either way, when we get back in the gym on Monday, we are going to push hard and trust we’ll get to finish this time around.”

The remaining football teams began outdoor practice using social distancing on Monday. Teams may begin full-contact practices after completing a round of negative testing this week.

The volleyball quarterfinals will resume on Jan. 12. Edwardsburg and Grand Rapids Christian are scheduled to compete at Three Rivers High School, according to the original schedule.

the semifinals, which will also be hosted at Kellogg Arena, are scheduled for Jan, 14-15.

As with the football tournament, no spectators will be allowed at the competitions.

The semifinals will be played at the home site of the team with the highest playoff ranking on Jan. 16. The state finals are scheduled for the weekend of Jan. 22-23 at a site to be determined.

For more than two decades, I wrote an annual end of the year column known as the “Three Yards and... read more