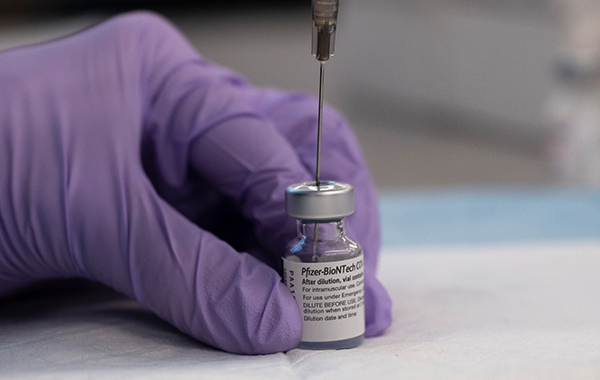 DOWAGIAC — After months of waiting, Cass County now has the tools to fight back against the COVID-19 pandemic.

Tuesday’s clinic was the first Phase 1A clinic scheduled this week for Emergency Medical Service workers, first responders, and health care workers who are not being vaccinated through a hospital or other organization.

The VBCDHD staff, who will be facilitating the clinic, were the first to receive the vaccine on Dec. 23.

“The hospital and medical providers are being taken care of by the hospital,” said VBCDHD Director of Emergency Services Jennifer Zordan. “Public health is focusing on EMS and medical first responders to try to get them vaccinated in the community. We still have to maintain social distance even with our masks, use hand sanitizer and all those things we’ve been doing. We will be doing screenings at the front door to make sure nobody is ill when they come through.”

Distribution of the vaccine in Michigan will be in a phased approach as it will be several months before enough of the vaccine has been received to vaccinate everyone. The prioritization guidance, established primarily by the CDC, has an emphasis on ensuring the continued functioning of the health care system and essential services in the community and protecting people at increased risk for severe COVID-19 illness.

“It could include adult foster care, long-term care, any private practice-type office and urgent care workers who may not be associated with a hospital,” she said.

Priority Phase 1B will focus on citizens age 75 and older, first responders such as fire and police departments, critical infrastructure and teachers.

“We’re making sure that we reach out to as many of our frontline partners as we can to get them vaccinated,” Zordan said. “We’re looking at about a 50 percent coverage rate right now for agencies that have responded, so that will probably go up over time. We’re hoping to get around a 70 percent coverage rate.”

According to Zordan, the Moderna COVID-19 vaccine is a messenger ribonucleic acid vaccine that is administered as a two-dose series, 28 days apart, into the muscle.

The primary role of RNA in the body is to convert the information stored in DNA into proteins. Unlike most vaccines, which insert a weakened germ into bodies to trigger an immune response, mRNA vaccines teach cells how to make a protein that triggers an immune response inside bodies.

“It is a brand-new technology,” Zordan said. “That’s the reason that it was implemented so quickly. Typically, companies use eggs and other forms of technology to develop a vaccine but this one uses mRNA. We’re excited that it’s here and we’re ready to go.”

Zordan went on to say that the Moderna vaccines are “frozen” vaccines, meaning they are kept in storage at –20 degrees C to prevent the mRNA from being destroyed. Once thawed and reconstituted, the vaccine is only usable for six hours.

“It is important that we’re only mixing what we need so that it doesn’t go to waste at the end of the day,” she said. “We want to be really careful about making sure that we schedule the right amount of people. There are 10 doses per vial, so we’re looking at rounds of 10.”

According to the Centers for Disease Control, the Moderna vaccine was 94.1 percent effective at preventing laboratory-confirmed COVID-19 illness in people who received two doses who had no evidence of being previously infected.

“‘Pretty good’ effectiveness for the CDC is at least 80%, and this one’s 94, so we’re doing pretty good,” Zordan said.

After months of tireless work on the front lines, Zordan is hopeful that the vaccine signals the beginning of the end of the pandemic.

“You know, it’s like getting to the top of the mountain,” she said. “We can see the other side. Now we have another tool in our toolbox that can help us fight and we can actually protect people before they get sick. It’s gonna be several months before we see a lot of light but this is the first step. We’re really excited.”