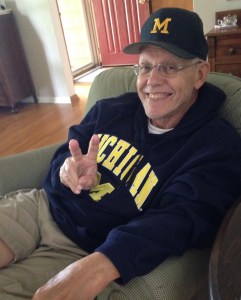 He attended St. Mary’s grade school and graduated from Niles High School in 1955. Charlie lettered in football, wrestling and track. In 1954, he set the then class A Michigan high school football state records for most touchdowns scored in a single season and most points scored in one season. Charlie earned a football scholarship to the University of Michigan and later served in the U.S. Army. He then attended the University of Wyoming and graduated from Central Michigan University. He had a successful career as a general manager in various wire manufacturing plants, including National Standard in Niles. As a member of the army, he was stationed in Colorado Springs, Colorado, where he met and married Judith Margaret Ahrens, who was attending Loretto Heights College in Denver. Charlie and Judy married at the Corpus Christi Catholic Church in Colorado Springs had three children; Michael Charles, Mary Kathryn (deceased) and Stephen Scott, who all grew up in Niles. After their children graduated from college, Charlie and Judy bought a house on Diamond Lake in Michigan where many family memories were made. Charlie and Judy later relocated to Chapin, S.C., North Hampton, Mass. and eventually retired to South Bend, Indiana. While in South Bend, they spent more time with their family and reconnected with old friends in the area, making many priceless memories. They spent the winter months in Hilton Head, S.C. where they enjoyed the ocean, Charlie’s golf outings and Judy’s volunteer work. Eventually, they moved to Neenah, Wisconsin to be closer to their oldest son, Michael, and his family.

Charlie never lost his competitive spirit and had lots of joy challenging his children and grandchildren in Gin Rummy. He also made memories golfing with Stephen and searching for family genealogy with Michael. He was a member of St. Margaret Mary Catholic Church in Neenah where a mass of Christian burial will be held in the future when safe for family to attend.

The family would like to extend a thank you to kind friends and loving caregivers at the VNA in Neenah. We are also very grateful to ThedaCare at Home Hospice for their compassion, care and love to Charlie. All of them commented on his great smile. Charlie is survived by his wife, Judy, his sons, Michael (Stephanie) Neenah, Stephen (Lisa) Omaha, Nebraska; grandchildren, Kathleen Thomas (Aaron Jank), Patrick Thomas, Ryan Thomas, Ivan Thomas, John Thomas, Robert Giacalone (Kayla) and Christopher Giacalone (Katie). He also leaves behind his six great-grandchildren and his brother, J. Michael Pethick (Vivian). He was preceded in death by his daughter, Mary Kathryn Thomas (Giacalone), his father, John Thomas (Lydia), mother, Helen Thomas (Jack), in-laws, Alfred and Helen Ahrens. Contributions in memory of Charlie can be made to the Neenah Public Library or ThedaCare at Home Hospice. For online condolences, please visit: kesslerfh.com.