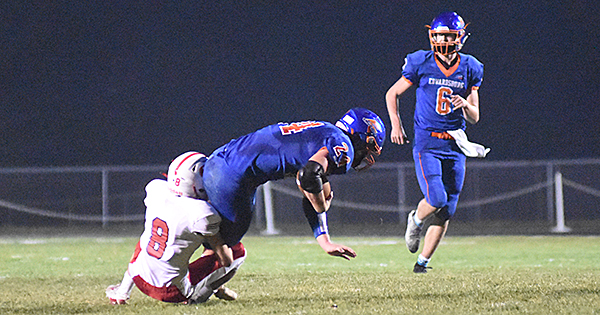 The Edwardsburg football team will resume practice Monday as the state reset the dates for the playoffs to restart. (Leader file photo)

EDWARDSBURG — The on-again, off-again Michigan High School Athletic Association conclusion of the 2020 fall sports season is back on.

At least for now.

The MHSAA announced late Saturday that non-contact football practice, which was put on hold last Tuesday, just one day after restarting practice, could resume on Monday. The state also said that the first round of the Michigan Department of Health and Human Services’ pilot testing program would begin on Monday.

While the state athletic association continues to follow the MDHHS emergency orders, it said that the fall sports season would conclude by the end of January.

According to the statement released by the MHSAA, football teams may begin two-a-days outside with non-contact conditioning drills on Monday. They will be allowed to wear helmets and shoulder pads, but must maintain physical distancing.

“Schools will test players, coaches and other team personnel, with full-contact practice then allowed after a first round of negative results,” read the statement. “The testing program will utilize BinaxNOW antigen tests that produce results within 15 minutes.”

Fall high school sports, along with the start of preseason drills for winter sports, were paused on Nov. 18 by the MDHHS. The original orders were to have experience in December, but were extended until Jan. 15.

“If restrictions on non-contact sports are lifted, then volleyball and swimming and diving could practice and compete at that time outside of the required rapid testing program. If the MDHHS epidemic order continues, volleyball and swimming and diving could begin practice. Still, those teams and individuals will have to follow all requirements of the MDHHS rapid testing pilot program to be eligible to participate.”

With those guidelines set in place, the MHSAA announced that the 11-player regional finals would be played on Saturday, Jan. 9, while the 8-player state semifinals will also be played on that date. Those games will be played at home sites.

The 8-player state finals will be held on Saturday, Jan. 16, at a site to be announced, while the 11-player semifinals will be contested at home sites of the teams with the highest playoff points on Jan. 16.

The 11-player state finals are scheduled for the weekend of Jan. 22-23. Ford Field could remain the site of the state finals, but the MHSAA will announce that later.

Complete plans for restarting the state volleyball tournament and the girls swimming and diving state finals, will also be coming shortly from the MHSAA.

The state volleyball tournament has reached the quarterfinal round, which will be hosted at previously determined sites. The semifinals and finals are still scheduled to be held at the Kellogg Arena in Battle Creek. The MHSAA said volleyball and swimming and diving will be completed by Jan.30.

Edwardsburg coach Kevin Bartz said the players and the coaches were excited to get back to work last week, but once again, things changed, and the season was put on hold again.

Bartz worried about the potential for such an issue, as well as the number of questions he and the Edwardsburg administration had about how the testing would be done.

“I didn’t see that one coming,” Bartz said about the announcement of when the season would restart. “We are excited. We have been given an actual date. What we don’t know yet is the testing details. When it has to be done by, what the test is exactly, and where do we have to go to do it?”

Bartz said he has very little concern about playing outside in cold and snowy conditions. The Eddies have done so in previous playoffs runs, so they will take what comes their way. He is excited about the potential of playing two home games before heading to the finals.

“When we played Holland Christian, we had to scrap off the field, and it was down in the 20s and 30s,” he said. “I guess that is what we are going to see. The problem would be more about practice and being efficient in what we do, both inside and outside, how we are going to divide that up. You want to get out there and play in the elements, but you cannot stay out there for too long.”

Bartz said the first week of practice will be getting back to football fundamentals, while the second week will be spent preparing for their opponent, Grand Rapids South Christian.

A win over South Christian would allow the Eddies to host either Cadillac or Forest Hills Eastern in the state semifinals.

“It would be great to be able to stay home for two weeks and not have the travel to go with it,” Bartz said. “Having all your facilities there to use would be a great advantage for us.”

Along with the announcement that the state tournaments would continue was the harsh news that fans will now be allowed to come to the games. Bartz said that his parents are willing to make that tradeoff for a chance that their children could win a state championship.

“I talked to parents before, and I know they are not going to be overly excited, but they also said that if we get the opportunity to finish, and that means we can’t go, that is fine,” he said. “I do not think you are going to hear too much of an uproar about that. I think just the fact that we are going to be able to finish, and that is the compromise, I think we are alright with that.”