Martha Marie Cooper, 89, of Cassopolis, died peacefully Sunday, Dec. 20, 2020, in the comfort of her family’s presence.

There’s Mother Theresa and then there’s Sister Cooper. Her motto was “Love God, Love People” and her favorite question to everyone was “Are you a who-so-ever?” Sister Cooper had a love for her community and the church — The Lord’s House — she and her husband pastored for more than 50 years. 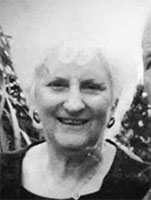 Sister Cooper was the matriarch of her family. The children, grandchildren and great grandchildren all knew of the unconditional love at her house. They will long remember family game nights around the kitchen table.

In addition to her husband, she was preceded in death by her parents; one daughter, Pamela Ann Cooper; two sons, Gary Ray Cooper, Albert S. Cooper Jr.; one grandson, Frankie Pascoe; six siblings; and one daughter-in-law, Vicki Cooper.

Sister Cooper’s remains will be laid to rest in beside her beloved husband in Prospect Hill Cemetery in Cassopolis.

The family prefers contributions in memory of Sister Cooper be made to The Lord’s House, 60835 Decatur R., Cassopolis, MI 49031.