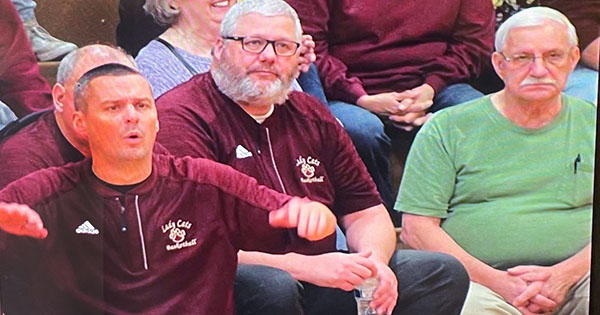 Geer remembered for his dedication to Brandywine athletics

NILES — The Brandywine Bobcat Nation recently lost a member of its family.

Ronald Henry Geer, 77, passed away Dec. 7. Geer was a bus driver for Brandywine Community Schools for years. He was particularly fond of driving around the Bobcats sports teams and became a member of the Bobcat Nation, according to Brandywine Athletic Director Vance Stratton, Girls Basketball Coach Josh Hood and Wrestling Coach and Assistant Football Coach Rex Pomranka.

“Ron was a bus driver here at Brandywine for years and became one of the drivers that really enjoyed transporting athletic teams,” Stratton said. “Ron tried to get as many driving assignments for athletics as he could. He would almost always have his wife, Sue, ride along on the trips with him, and they would become fans in the stands once any of the contests began, and it wouldn’t matter what sport he was driving for. He became a true fan of theirs.”

Stratton said Geer and his wife were not just part-time fans because of his job with the transportation department.

“When not driving for the teams, you could look up in the stands at basketball and football games, or sitting around the new tennis courts this fall, and see Ron and his wife, Sue, there as athletic boosters for our programs,” he said. “Ron behind the scenes many times made sure no athlete went hungry on a road trip or purchased items for teams when he felt he saw something that would be nice and the team could use. Above and beyond, just a bus driver for our programs. He was a true member and will always be remembered as part of the Bobcats athletic family.”

Hood said that Geer made an impact on students and student-athletes alike.

“Mr. Ron Geer was a proud employee and supporter of Brandywine Schools,” he said. “Mr. Geer made his biggest impact from the driver seat of a Brandywine bus where he drove students on his daily route, to numerous sporting events, fifth-grade camp, and many band/choir competitions. Mr. Geer never went anywhere without his wonderful wife, Sue, who joined him and the team on the bus to away games. They would drop off the team, head to a local restaurant for a quick dinner date, then head back to the game to cheer on their beloved Bobcats.”

The players and coaches always knew where to find Geer and his wife at games.

“At home basketball games, you could always find the Geers right behind our bench cheering on the Bobcats,” Hood said. “Ron loved Brandywine, and the community loved him. He will be greatly missed by all. He was a great man. That picture outside of my office sums it up. He was next to our bench for every game. Going to be tough for all of us to not have him there this season.”

Like Stratton and Hood, Pomranka will always remember Geer and his wife being big supporters of the Brandywine athletic teams and the school.

“He traveled with me to a lot of wrestling meets and junior high track,” he said. “He asked how the teams were doing. At home meets, they were always there. He said since they could not drive anyone to the home meets, they could at least come and watch.”

Pomranka also got to know the Geers as his neighbors.

“We would always talk about what stuff is going on behind the woods,” he said. “For our fundraisers, he always had some metal for us to swing by and pick up. He was always helping out the team any way he could.”

Even if he did not drive the Bobcat to a sporting event, like to weekend tournaments when the wrestling team took vans, Geer would make a point of finding out the results.

“No matter what, he would always stop and talk to me to find out how we did,” Pomranka said. “He was truly a Bobcat.”

Geer, who was born in Niles in 1943 to the late Henry and Cleo (Myers) Geer, was laid to rest Dec. 16 in Bertrand Bible Church Cemetery. Memorials may be made to Bertrand Bible Chruch, 1008 Ontario Road.