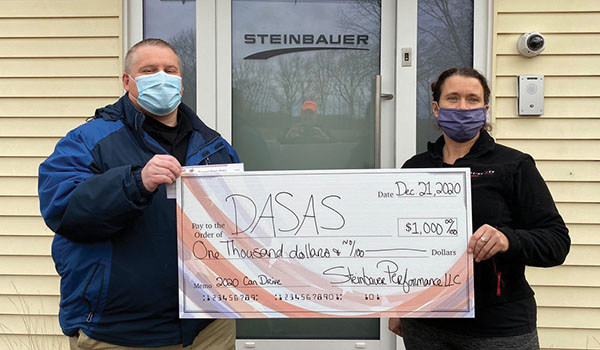 DASAS serves St. Joseph, Van Buren and Cass counties and leads efforts to end domestic violence and sexual assault in southwest Michigan. The organization offers a number of services to domestic and sexual abuse survivors including a 24-hour crisis hotline, counseling, support groups, legal advocacy and access to housing and financial assistance, in addition to many other services.

This is the second large donation DASAS has received in as many weeks, as the Cass County Sheriff’s Office gifted the organization $1,800 last week.

“Our company has been trying to get more involved in the community,” Goodrode said. “Domestic and sexual violence are important issues for us. The need is there and we saw a way to help.”

The donation was funded by a deposited can drive Steinbauer hosted from May to October.

“We came up with the idea in March,” Goodrode said. “We publicized it on Facebook and the Cass County Sheriff’s Department passed the word around.”

According to Goodrode, the COVID-19 pandemic inadvertently contributed to the success of the drive. Michigan bottle return facilities were closed from March to June 15 due to the pandemic.

When the dust settled, the company ended up cashing in more than 10,000 cans, glass and plastic bottles. Goodrode estimates that she returned a few bags of bottles and cans each day for three weeks straight to complete the process.

“There were a lot of cans,” she said. “loaded up my van with as many as I could take. I spent many mornings at the grocery store.”

Founded by Herbert Steinbauer in 1996, Austria-based Steinbauer engineers products for many automotive brands, including passenger cars, agricultural machinery, heavy-duty equipment, forestry machinery, trucks, pickups, vans and motorhomes. The company has business operations in more than 30 countries around the world and opened a facility in Dowagiac in 2017.