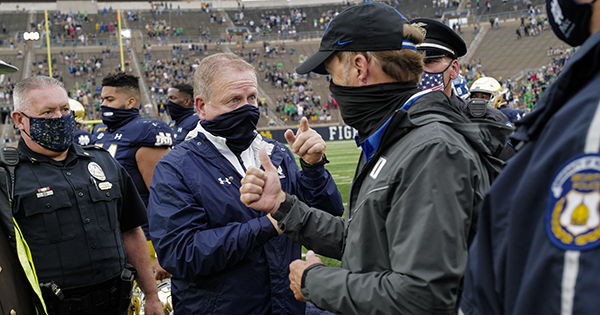 Notre Dame’s Brian Kelly has been named the ACC Coach of the Year. (Photo courtesy the ACC)

NOTRE DAME, Ind. — After the third undefeated regular season in his 11-year Irish tenure, Notre Dame Head Coach Brian Kelly has been named ACC Coach of the Year by the Paul “Bear” Bryant Coach of the Year Award, as well as being selected as a finalist for the national 2020 Bryant Award.

The Paul “Bear” Bryant Award annually recognizes the country’s top college football coaches for their contributions both on and off the field, making the sport better for athletes and fans alike by demonstrating grit, integrity and a winning approach to coaching and life.

In his 30th season as a collegiate head coach in 2020 and 11th year at Notre Dame, Kelly owns the second-most wins (102) among all head coaches in Notre Dame’s history, second only to Knute Rocke (105), and Kelly is the winningest active coach in the FBS with 273 career wins.

In 2020, he notched his first win over an AP No. 1 team with the 47-40 win over Clemson (Nov. 7). With the 52-0 shutout of South Florida, he became the third coach in Notre Dame history with three or more wins of at least 25 points over ranked teams, joining Lou Holtz and Frank Leahy (eight).

He joins Knute Rockne (13), Leahy, Ara Parseghian and Holtz (11) as the only Notre Dame coaches to spend 11 or more seasons on the Irish sidelines. He ranks second in winning percentage among active FBS coaches (.741) who have coached in 300 or more career games (Nick Saban .795). He has finished .500 or better in 28-of-30 seasons as a head coach.

The winner of the Bryant Award will be announced on Jan. 13.