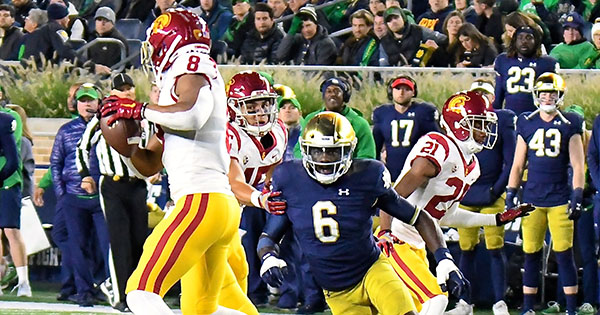 Jeremiah Owusu-Koramoah, of Notre Dame, has been named the Butkus Award Winner for 2020. (Leader file photo)

NOTRE DAME, Indiana — Capping a senior season as one of the best defensive players in the nation, Notre Dame senior linebacker Jeremiah Owusu-Koramoah has won the 2020 Butkus Award, which honors the top linebacker in college football.

He joins a rich tradition of high-level linebacker play at Notre Dame over the last decade, with Manti Te’o (2012) and Jaylon Smith (2015) also being named Butkus Award winners in their time playing for the Fighting Irish.

A preseason All-ACC selection, Owusu-Koramoah has totaled 56 tackles in 2020, which leads the Irish, also leading the team with 11.0 tackles-for-loss. He has been responsible for forcing multiple turnovers, including an interception, two fumble recoveries (one returned for a touchdown) and three forced fumbles this season. He has added three PBU.

Against Syracuse, Owusu-Koramoah noted five tackles, 0.5 TFL, one FF, one FR and two pass breakups. He forced a fumble on the opening drive of the first half for his third forced fumble of the season (fifth of his career). He recovered another fumble, forced by the Irish, for his second FR of the season and fourth of his career, which led to a Notre Dame touchdown drive.

His first-career interception came at Pitt, setting up a Notre Dame touchdown drive. In the win over then-No. 1 Clemson, Owusu-Koramoah posted nine tackles (seven solo), 0.5 sack, 2.0 TFL, one forced fumble and the fumble recovery touchdown, which was the first score of his career. Three plays later, he forced a Clemson fumble, which was also recovered by the Irish. For his performance, he was named player of the week for the Nagurski Trophy and Bednarik Award, and ACC Linebacker of the Week.

Owusu-Koramoah ranks ninth among all FBS players with two fumble recoveries this season. He ranks tied for fifth among all ACC players in forced fumbles (0.3 per game).