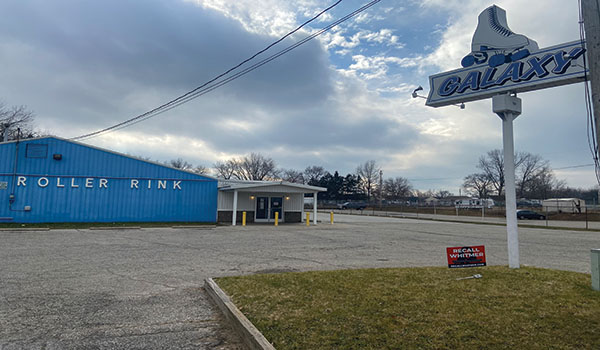 Galaxy Roller Rink, located at 1120 Ontario Road, in Niles, has been collecting donations for legal fees over the past weekend. The rink's owner has a court date on Wednesday for citations of reopening against epidemic orders. (Leader photo/CHRISTINA CLARK)

Correction: In an earlier publication of this story, Amy’s last name was misstated. The story has been updated with her proper name. The Niles Daily Star regrets the error and is happy to correct it.

NILES — Celebrating the 40th anniversary of her business is what Amy Kidwell would rather have been doing this weekend.

Last Monday was the anniversary according to Kidwell, owner of Galaxy Roller Rink, 1120 Ontario Road, Niles. Instead of celebrating, Kidwell rallied a protest over the weekend to show support to help her save her business. Kidwell said she has been served with a court date, as she has reopened against epidemic orders recently. The second time, she said, she did not realize the “pause to save lives” order had been extended, and she was served a ticket within minutes of opening.

In the document, BCOS Deputy Vanessa Williams is said to have arrived at 7:28 p.m. at Galaxy Roller Rink, and saw approximately 20 juveniles lined up waiting to enter the establishment. During the Dec. 4 interaction, Williams delivered a warning letter for violation of public health orders to Kidwell.

A separate complaint on Dec. 11 tipped Williams off to Galaxy Skating Rink being open once again. When Williams arrived, she noted more than 100 juveniles inside the roller rink sitting and talking or skating, without masks. Williams made contact with Kidwell on Dec. 11 while at the establishment and cited her for violating the December epidemic order from the MDHHS. Her previous interaction was cited as having been in violation of the November epidemic order from Michigan Department of Health and Human Services.

During the COVID-19 shut downs, indoor roller rinks not been able to reopen. In Friday’s MDHHS epidemic order update, indoor roller rinks were continued to be relegated to having one person per 1,000 square feet, or offer one-on-one lessons. Open skate and skating parties have not been reopened by the state of Michigan.

The shutdown on roller rinks has been hard on Kidwell, who said she has not received any governmental aid for her business.

Friday, Kidwell decided to rally community support for roller rinks by hosting a protest. In addition to drawing support for her business, Kidwell said the protest was meant to emphasize “citizen’s freedom to make their own decisions.”

“[The protest got] to be bigger than what we planned,” Kidwell said. “I have wonderful community support.”

On Galaxy Roller Rink’s Facebook page Dec. 16, a post asked supports to come out on Friday night to let their voices be heard. The post was written by Kidwell’s daughter.

“Due to a recent threat from the attorney general’s office from Lansing, Michigan, to try to force her to close her business, she is taking a stand for freedom,” the post read. “Come skate on open skate, and all the earnings will help with legal fees. She loves her business and all her regular customers, and gets excited with the new ones, too. Galaxy has been home to a lot of kids through the years and rang in its 40th year on Monday with no celebration for its accomplishment.”

According to Kidwell, she was served 75-pages of legal documents on Friday. She has a court date with the county on Dec. 23.

“I think people are wanting to stand up for this,” Kidwell said. “I’ve always stayed in the background. This isn’t me, but enough is enough.”

For Galaxy Roller Rink, the plan is to remain open this weekend, defying the close down orders.

Kidwell said community members could come and protest, and if they wanted to skate, she was taking donations.

On Friday, Kidwell said all donations from over the weekend would go toward keeping the roller rink open. In total, more than 100 people showed up to support the business over the weekend.

By Monday, Kidwell had retained legal counsel and was preparing for her Wednesday court date.

This story has been updated as information has become available.

HOWARD TOWNSHIP — Police are currently investigating a shooting that left one woman injured, according to the Cass County Sheriff’s... read more