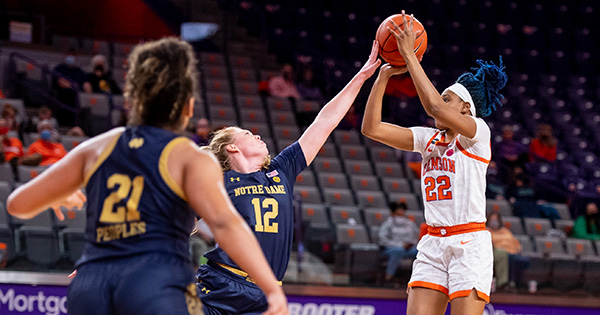 CLEMSON, S.C.  — A cold-shooting day and a tough day on the boards resulted in the Notre Dame women’s basketball squad suffering a 78-55 loss at Clemson on Sunday afternoon.

Both of Notre Dame’s players who finished in double figures came off the bench today. Destinee Walker led with 14 points on 6-of-10 shooting, while Abby Prohaska tallied a career-best 12 points on a 5-for-8 day from the floor.

Westbeld reeled in a career-high 11 rebounds but saw her double-digit scoring streak come to an end after scoring just six points. Westbeld also dished out a career-best five assists.

“This was a tough game and tough result for me, personally, from the way we started the game,” said Notre Dame Head Coach Niele Ivey. “We didn’t have the defensive energy that we had on Sunday. I was disappointed with the defensive mentality. Clemson played an incredible game. We didn’t come out with that edge and that really set the tone for the entire game.”

Gilbert kicked off the game with an and-one but it was followed by a Clemson 11-2 scoring run. Brunelle and Mabrey each connected on a three to pull within one possession at 13-11, but ultimately seven turnovers, plus a 4-of-15 shooting performance in the period, resulted in a 17-11 Tigers lead.

The second quarter was the difference-maker in the game, as Clemson outscored Notre Dame 25-11 to take a 42-22 halftime lead. Walker subbed into the game at the 7:42 mark and scored seven of the team’s points that period (team-high at the half).

The Irish were plagued by foul trouble, as six players possessed at least two fouls each, with the total foul count being 14 to 7 at the half.

Notre Dame had its best quarter in the third, where they connected on 7-of-11. In fact, over the latter half of the period, the Irish recorded a 14-5 scoring spree. However, the Tigers maintained their hot hand as well, shooting 8-of-13 in the quarter to hold a 65-41 advantage heading into the fourth. Mabrey and Walker combined for 11 of the team’s 19 points that period.

Lastly, the Irish outscored the Tigers 14-13 in the fourth quarter to bring the game to its final of 78-55

The Irish will get some much-needed family time over a short holiday break before returning on Dec. 26 to resume testing and practice. The next game is set for New Year’s Eve in Miami.